The road north east out of Stornoway ends at New Tolsta and a coastal wilderness.
In 1961at the age of eight I left the Mull of Kintyre with an accent thicker than porridge and suffering from pneumonia but never once had I thought to cut the Caledonian umbilical cord. It was forty five years before I returned for more than a brief climbing holiday.
In 2005 I heard that a traditional croft house and barn, in remarkably original condition and at the top end of Lewis had come on the market. When I say remarkably good that would be perhaps to my eyes only in that it was in remarkable original order but most people would have considered it to be in a terrible state and more than once I heard it said “what’s he messing about with that hovel for?” That only served to shows me how we have become seduced by what we perceive as modern comforts and that I see as irrational and unsightly. The purest form of architecture is that which requires no architect and which comes from a peasant culture which over time has developed a way of living in harmony with their environment, from the places where they chose to build their home to the materials they found at hand to build them with. On the Outer Hebrides it was the black house that over centuries provided shelter from often harsh conditions and which later developed into the lighter white houses. When shell shocked soldiers were given land and packed off to the islands it was with no knowledge of the condition or skills required and so they built poured concrete houses that resembled those on the mainland. The interior was entirely of imported wood, V lining which gave a softer appearance even if it did little in the way of insulation with drafts whistling around between it and the cold concrete. 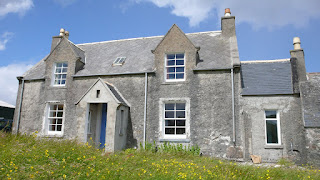 My remarkable house at New Tolsta was to all intense and purpose rather unremarkable from the outside giving the impression of simply another poured concrete house but it was in fact built in stone. Number seventeen New Tolsta, was the last remaining house on the road leading north east of Stornoway since eighteen lost its roof to the gales and had been demolished. No 17 was also at a price that fitted my inheritance. There followed three glorious summers of physically hard renovation work replacing that which had rotted and introducing a few rational comforts. The house was ready to live in and awaiting furniture. There is little choice when shopping for period items from the island other than the Bethesda Hospice charity shop, there being only one second hand shop and certainly nothing that resembles an antique shop. Treasures however are abound and to be found in the most unlikely of places, like the early 18th century mahogany butler’s tray, sun bleached and smelly from its former use as a fish box discarded along with other scrap wood. So the interior has been furnished almost entirely from charity shops and renovated in true thrifty Hebridean style with some of my own hand made items plus a few recycled and restored skip finds as well as friendly donations.
The house is one of the very few that still retains its original windows from the early part of the last century, renovated by Malcolm Macdonald from Out End Coll in September 1954 and half a century on they were still worthy of repair even though the house had stood abandoned for over thirty five years, they said the sheets were still dry in the linen press after all those years. In 2003 the house had been the backdrop for a twelve part children series made by Scottish television called the Ice Cream Machine and there was something magical in its position perched high above the massive beach of Traigh Mhor acting like a visual magnet where everyone who took the bus north east out from Stornoway to the last stop before the beach would remember that last house. It required significant urgent work and so having wondered if perhaps I wasn’t getting too old for this sort of serious single handed restoration I simply knuckled down and got on with it. Having a plumber DJ living two doors away made a significant difference and the local Joiners Bench in Stornoway made doors exact to my artist sketch specifications. The original V lining interior and staircase were in remarkable condition considering that sheep had often been seen at the upstairs windows. 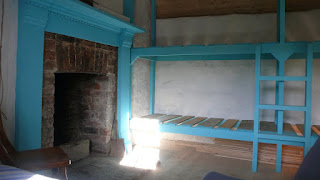 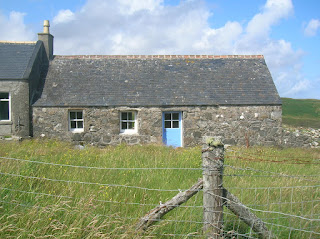 The barn at No 17 was originally part of New Tolsta farm and later it was used as a shepherd’s cottage or bothy and farm steading before New Tolsta was lotted. John Macleod later acquired the property and converted it into his home. The eighteen crofts of New Tolsta were created during the period of land rights following the First World War when the original old farmhouse across the road was demolished. The barn below the house remains as the only building from the original farm although there are vestiges of earlier black house settlements at its lower end. During its time as a shepherd’s cottage the barn acquired many carved and dated signatures on the roof sarking and beams as well as on an old internal door that now has pride of place in the hall of the house as the door to the under stairs cupboard. The roofless wash house between the barn and house has now been used to bring the convenience of modern life in from the midden.
A seashore theme is almost inevitable given the location with driftwood shells and sea worn frosted glass. The artist within has surfaced in the bathroom where the Ullapool pebbled shower comes alive beneath ones feet. This is however very much a wooden house, slipped neatly like a warm sock into the stout protective boot of the outer stone walls. The windswept landscape means any attempts to establish a garden are fraught with difficulties and once hedges are grown they only succeed in harbouring midges so I have left nature very much to its own resources planting just one single shelter screening to the west, introducing more heather and ferns and leaving the buttercups to form a golden mantel above fescues timothy and couch. In the summer of 2007 a massive Mackay digger arrived; removed the peat bog at the west end of the house, made a new entrance and connected house to drains. However the more delicate but none the less physically exhausting work of removing the turf and accumulated detritus from in front of the barn to reveal the old cobbles had to be done by hand. Digging out the old drainage ditches produced far more than mud as I heaved at the remains of a brass and iron bed, leather shoes, cutlery and the inevitable shards of blue and white pottery. Little was wasted on these islands but if it was thrown out it got little further than the midden. At the back of the house what I thought was the natural contour of the land proved to be another tip of ashes from the fire and more broken crockery. In 2008 I added a traditional open porch to protect the front door and visitors alike from both east and west winds. I now can’t imagine being in the house without somewhere to take off wellies and leave a walking stick.
Furnishing the house has been fun slowly accumulating the eclectic mix of a house lived in over generations seeing the arrival of internal plumbing and electricity in the 50’s, of plywood and Formica in the 60’s and thankfully only the bare minimum of plastic since then. My aim was to create continuity and the feel of a house that had been in constant occupation since its conception, which included those vestiges of the roots from an earlier family history in short a house that told a story. 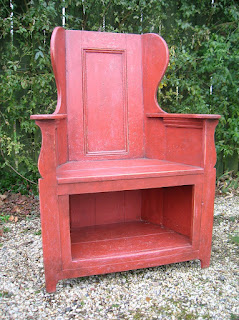 During a visit to Stornoway Museum my eye was drawn to a simple Hebridean chair and the following winter while staying with my mother down in Cornwall I constructed two examples from old doors and reclaimed timber much as they would have done during the days of Black house living on the islands. A distressed paint effect gave a convincing authentic look and they have turned out to be remarkably comfortable. The remaining light fitting from a chapel my father once owned down in Cornwall now graces the stair well. I have been the benefactor of other people unwanted and outdated furniture from the 70’s sappily mahogany coffee table and collapsed and rotting Scottish sideboard to the almost new stainless steel saucepans. A Belfast sink once used as a drinking trough out on the croft was plumbed in the kitchen and a discarded stainless steel draining board cut up and framed with beaten lead surround. I discovered the original larder cupboard door out in the barn so rebuilt the larder back under the stairs and that transformed immediately the symmetry and function of the kitchen. I resisted the temptation to lighten the hall and stair well by painting when a visiting shepherd waxed lyrical over the original stained pine and all it needed was livening up with a re-varnishing, he was right. I have always found it important to go along with the original concept of a house since it is often based on a life style more rational than that of the 21st century. 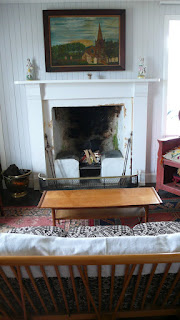 The parlour fireplace had benefitted from a more up to date Victorian cast iron coal fire insert presumably salvaged from one of the more prosperous houses in Stornoway but I decided to return to the traditional more open form which proved practical on occasions to cook on. The bedroom fire places although no longer in use still remain and help retain that traditional look as well as serving to keep aired the gable walls. Last year I asked DJ where my peat banks where and started the physically exhausting work of reopening them. Set high above the delightful and historic Ghearadha beach there is no better place to work although the horse flies did seem over abundant for late June. May would have been a better month to cut and by the end of July I had only got a third dry and under cover, the rest having to remain stacked out on the moor awaiting my return.
The adjoining stone barn is now set for conversion to a bunkhouse and will on occasions double as an artist studio. Two new windows and a back door discreetly placed have changed little its outward appearance and the original slate roof stands as testimony to the quality of the original work. Some of the original cobbles have been relayed from front to back door while tiles for the kitchen and bathroom were donated by a local hardware shop changing its display. The dormitory room will now sleep eight.
Posted by Hebridean dreaming at 6:22 AM 1 comment: