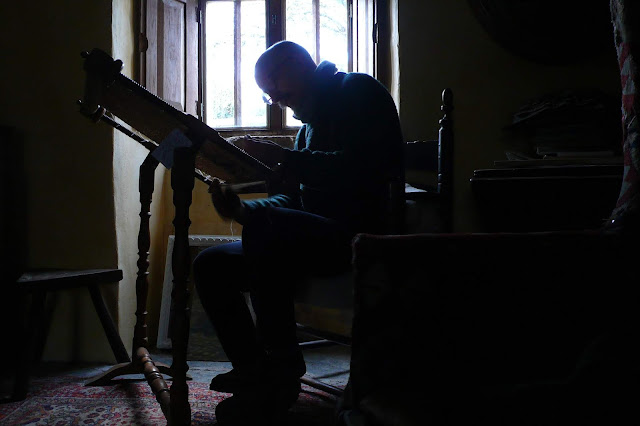 For several years now I’ve been searching for a floor standing fully adjustable slate frame and although these are readily available the modern version is nowhere near as good as those of the 19th century. So imagine my delight when in the local depot vente I discovered a fine fruitwood example in perfect working order for only 40 euros. They had no idea what the contraption was or just how useful it would be to me. The one big advantage with a floor stand support is that both hands are free to work which theoretically speeds up the process of embroidery. In addition this 120 year old example had split hinged rails with gripping pins that allowed for quick assembly as well as rolling on if required for longer pieces. I’m in the process of making a William Morris influenced embroidered bag for a fine carved wooden hinged support that has been kicking about for ages on my to do list.  The old curtain material dates from the early part of the 20th century and I remember them from my childhood days when mother was either taking them up or letting them down depending on what height the windows of our latest house were. I felt only a slight guilt when cutting a section off but I needed no more curtains and this fine fabric could also do well for upholstery or cushion backing. Nothing will be wasted, not if I can help it although as I folded the remainder back into the chest I did wonder just how long it would be before they saw the light of day again.

Posted by Hebridean dreaming at 4:51 AM No comments: 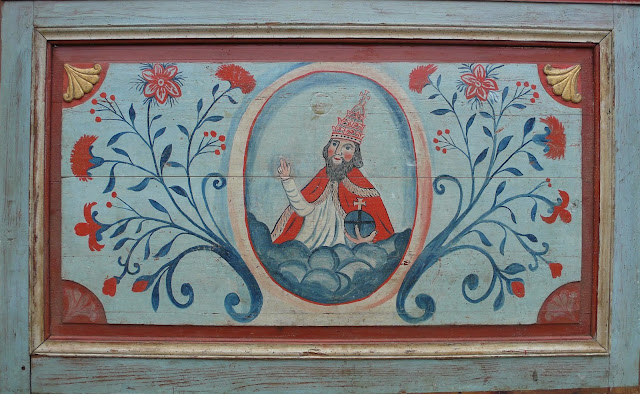 The first and only painting my father bought from me was a rather uncomfortable looking female nude study. I never understood just what attracted him to that image beyond the fact that his son had painted it. It soon became a point of embarrassment between us and like most mistakes ended up in the downstairs toilet. Some years later and following a reasonably successful still life exhibition I suggested that I paint over the nude and with a look of relief he agreed. I made no special preparation other than turning the image upside-down and painted this second oil directly over the first. The resulting freely painted gourds and brass rimmed wooden bowl was a great improvement and I enjoyed the fact that I could still make out the partial ghost image of the first painting. 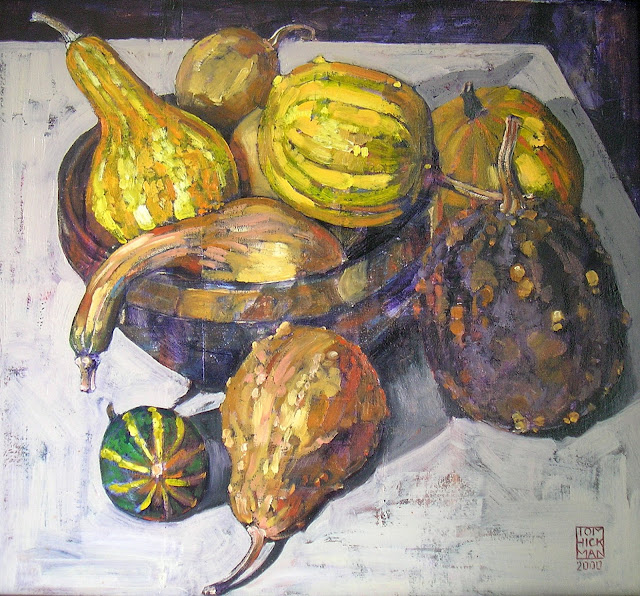 So enjoyable was the experience that I repeated the process of painting over another nude study with a Breton scene of a girl collecting water form a well. Here again the traces of the nude model seated contra jour before a large window still remained ghostly visible to my eye at least within the granite gable wall of the farmhouse but to the purchaser all appeared fine. When reusing canvases in this way I enjoy the process of painting through the confusion that often results in capturing a second image and the incidental nature of that under paint can at times provide interesting texture.
Only once have I had an inquiry to buy a painting that had already disappeared beneath a second or even third layer so on the whole this method of working has provided more sales than it has lost.
There are occasions when a partial repaint is required to correct a composition and this worked particularly well when transporting my father’s prize winning pig from inside the sty to outside in the field with a view of the old barn at Quarry farm near Poulton in Gloucestershire. 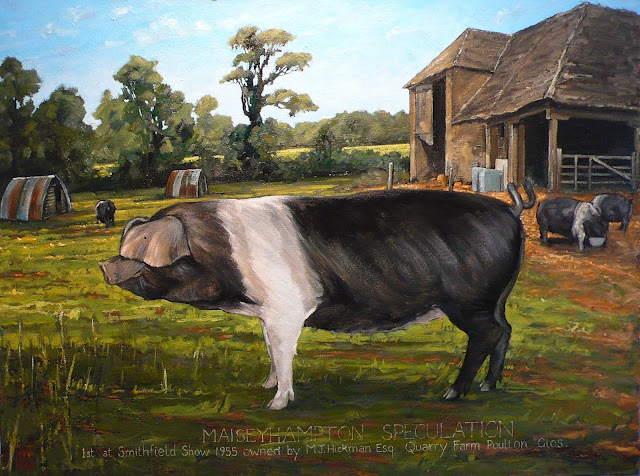 While the entire background was repainted the Wessex saddleback pig remained untouched. A similar process was required when recently I converted a large canvas of cattle within a Breton landscape into a South Uist view where only four out of the seven cows were retained. 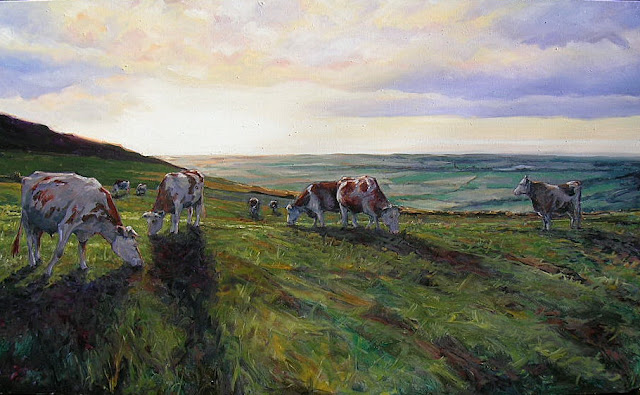 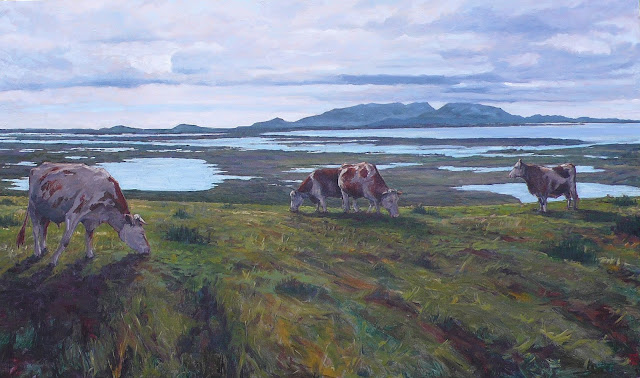 Almost a quarter of a century ago shortly after the old presbytery in Plouye had been emptied I discovered in a local bracante the front panel of the altar covering from the chapel of St Salomon which depicted a rather naïve rendition of God, resplendent with red cape, triple tiered trinity crown and clutching an orb between three raptor like fingers. During the subsequent restoration of the chapel it was not deemed necessary to incorporate this panel and so it has remained forgotten in my attic. So the other day while preparing a couple of old door panels for painting I felt it also was time to paint over God, replacing him with something suitably naïve but perhaps a little more sophisticated in its execution. While I wanted the subject matter to be more decorative I also needed it to be less ecclesiastical and so I settled on an architectural façade. 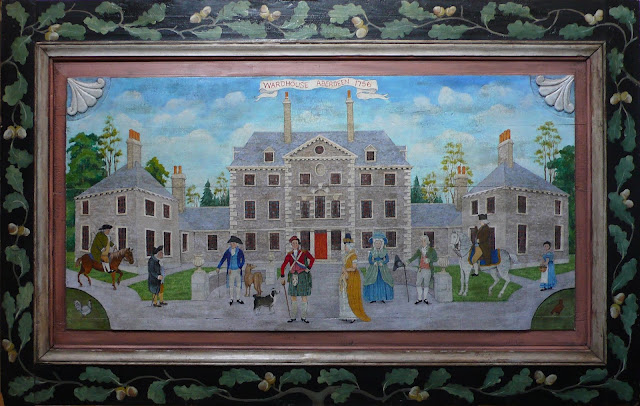 A few years ago a friend lent me a rather distressing photographic book on demolished building of Scotland throughout the 20th century. I selected the burnt out ruined remains of the mid-18th century Ward House in Aberdeenshire as the perfect subject matter for the panel repaint. I wanted a complete house portrait that would fit the landscape aspect of the panel but also to include some period people to add interest and scale. While some primitive folk art painting can be very simple and effective this would require a more pain staking detailed approach. I find myself slipping back more than half a century to my early days at Tregony School in Cornwall and a time when my drawing and painting remained unsophisticated, still retained a certain level of naivety. 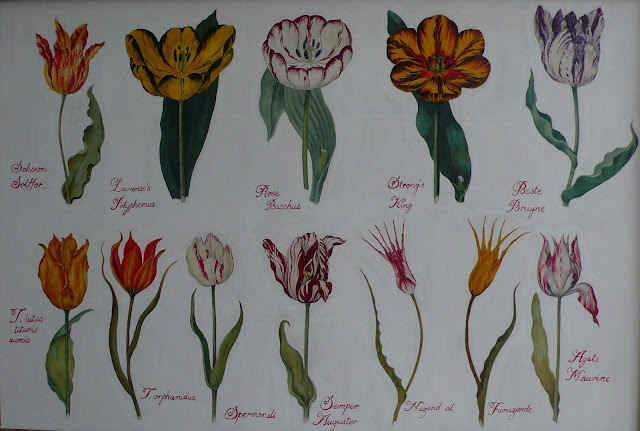 The wild tulips are native to the Mediterranean regions, Asia Minor and the Caucasus and extend as far east as China. The finest of these species are found around Bokhara and in Turkestan. It is generally considered to have been introduced here from Turkey during the mid-16th century. The German collector Graeber who worked for the Dutch nursery firm of van Tubergen wrote in the Botanical Magazine of Tulia lanata in the Asiatic Soviet Russia, “Every ravine in the red sandstone slopes reveals new forms which break the monotony of the leathery leaved pistachio and almond scrub. From the first days of spring there sprout here anemones, crocuses, irises, tulips, fritillaries and long shafted eremuruses.”

It puts me in mind of springtime in Tolsta, the crofts carpeted in orchids and on the machair and dunes the scent of primroses. 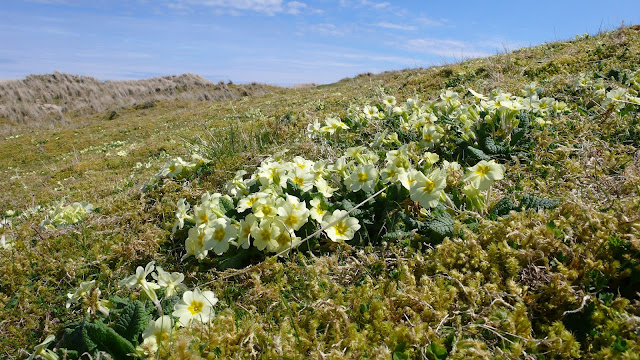 Having purchased an illustrated volume on tulips from the Bathesda charity shop for 50p I was inspired to paint a few specimens that illustrate the diversity the family tulipa encompass. While flowers attract insect life to aid in the method of reproduction so they also lift our spirits. We enjoy both giving and receiving flowers and the youngest of children without bidding would pick a bunch of wild flowers for mother. I remember a friend telling me she was so overwhelmed with the carpets of daffodils on the outskirts of Bath that she didn’t think at all before stopping and picking a bunch. She was brought back to reality with a jolt when a passer-by hurled some verbal abuse her way and threatened to call the police. Today’s bouquet of exotic blooms can be purchased throughout the year at any filling station or supermarket, carefully chosen foliage texture setting off the vibrant flowers full of sadly odourless colour. There are flowers for every occasion with Lily of the valley still being given to customers on May 1st. Weddings demand flowers but one has to specify no flowers at a funeral if you don’t want a repetition of the Lady Di syndrome. In France chrysanthemums are reserved for the dead and while arum lilies associated with funerals in England it is common to see them in a French bride’s corsage. Roses are inexplicably linked to love and war while the blood red of poppies are reserved for remembrance. The extra ordinary value put on tulips in the 16th century meant they were seen as a symbol of wealth that in the inevitable crash was once again observed in the late 20th century equivalent of bursting of the dot com bubble.

Birds of a feather 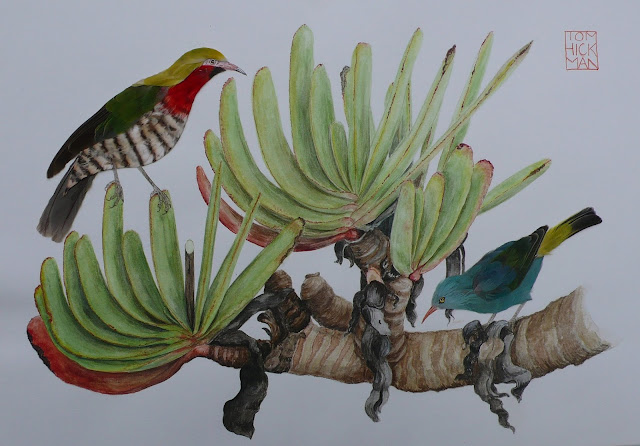 This time last year I was enjoying the warmth of Western Australia and the hospitality of friends, recovering from the usual round of seasonal party gatherings and looking forward to a walk about adventure in the National Parks of Cape Le Grand and Fitzgerald. This also proved to be a lucrative time as far as collecting feathers in the form of road kill. I hasten to add that I was borrowing the old Discovery Land Rover solely for transport and not as a method of destroying feathered wildlife. Given the speed of vehicles these days it is hardly surprising that casualties on the roads are inevitable but when I find myself at the side of the highway recovering some innocent victim to pluck I do take time to thank them for allowing me to take some of their feathers for my artwork. 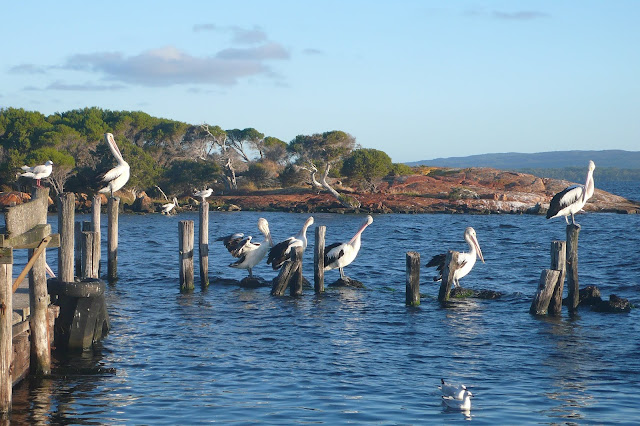 Exporting feathers from Australia is not a problem but getting them back in most definitely is. When in the spring of 2013 I held an exhibition of these feather bird pictures in Perth WA I brought them in unframed and decided to take the risk of not declaring them to customs. They were well wrapped into a sealed sketch pad and I breathed a sigh of relief when the nice Golden Labrador sniffed my back pack and moved on. That time all the work had been completed in Brittany but this time I decided to complete the botanical water colour part while in Australia. Now back in Brittany I am busy with the gluing of feathers and trying to keep warm in the studio during the rather non-physical process. As with all of my art I try to push myself to the limits of my capability, which in the case of this exacting work leads to ever more complexity and precision. The birds are entirely of my own Hickmanii imagination and bare only passing resemblance to any living species. When mounted and framed they will feature as another wall of exhibits in the “All that I do” exhibition at An Lanntair, Stornoway Arts Centre this coming September. 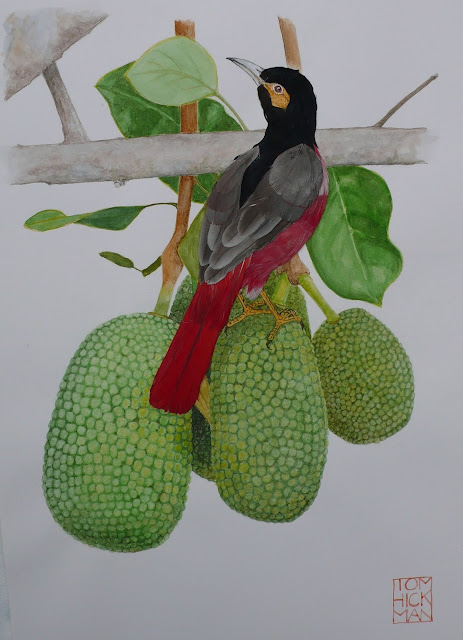 By reusing natures detritus to form works of art there is also a true sense of recycling and while in no way can this be regarded as up-cycling in shape or form they do possess more decorative charm than their dearly departed. The finished framed pictures will be for sale from £250 to £400 each.

Posted by Hebridean dreaming at 2:45 AM No comments: