THE FIRST STIFF BREEZE OF AUTUMN.

When my “Gallery Open” sign flew past the kitchen window heading for the Minch I took it to mean that the season was over and time to close my studio. We’ve been having our first real autumn breeze and while the last three cabbages are still firmly in the ground the wind has the effect of transforming walking into staggering, whereby both drinkers and non-drinkers look like they might have been at the whiskey. October heralds the drama of darkening skies with spectacular sunrises and brooding sunsets, days filled with fast moving rain soaked clouds splashed across with vivid rainbows and sudden shaft of sunlight, nights where the massive almost full moon plays hide and seek low in the southern sky.

People become talkative drawn closer by the prospect of shorter days while visitors dwindle and the camper vans return south to their period of hibernation. Many of the Greylag geese no longer bother to migrate preferring to sit it out overwintering on the crofts. There are complaints that they ruin the grazing but just as with the rabbits nobody thinks to eat them. Up at the sheep fank there’s dipping in progress and the best of the lambs have already gone to market. Birds take shelter from the high winds and larger birds are often hurled across the sky at alarming speeds. Buzzards no longer mew from on high but fly low across the fenced croft strips.
I am hustled from the back door with teapot in hand by the funnelled wind that passes down the back of the house and am thankful that I put no door on the entrance lobby to the studio so can leap in without fuss. Since the studio is rated as non-domestic it has come to the attention of business water rates and I have elected to forgo their services and extra ordinary expense for a rarely used cold water tap and toilet. These things are sent to try us and often the perceived convenience is when closely examined no real hardship to live without.


Last night the roof groaned with strong gusts from the North West and when twice some loose concrete fragment rattled its way down the roof I began to wonder if this wasn’t a little more than a stiff breeze. This morning’s inspection revealed nothing from the ground and the wind is still too strong for me to risk a ladder, whatever it was its evidently not structural. 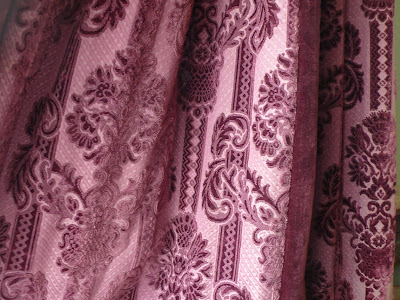 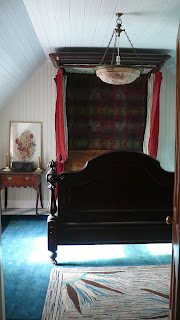 This summer I’ve made good progress on the interior with the second bedroom insulated and painted. The landing and stair-well ceiling is plaster boarded and sports a small classic ceiling rose. I love the delusions of grandeur that are so easily reproduced in a simple crofter’s cottage from the faux marble parlour mantle-piece and its painted Dutch delft tiled surround to the half-landing window where I’ve hung a pair of shabby though splendidly opulent curtains by W. Turner Lord & Co of 20 Mount St, Grosvenor Square, dating from around 1890 and according to the stitched on label were for the library window of Rylu House wherever that might have been. In the other bedroom I’m in the process of renovating a large mahogany half tester bed and reusing the red velvet curtains that sixty years ago hung in the bay window of our home on the Mull of Kintyre. I feel it is important in this era of the throwaway society that the old island traditions of reuse, or make do and mend are respected, if only by me alone.
On the ground floor I’ve installed shutters that I enjoy closing each evening, imagining that like throwing an extra tweed blanket on the bed they will provide a further layer of comfort against the lashing elements outside.
Posted by Hebridean dreaming at 8:12 AM No comments: