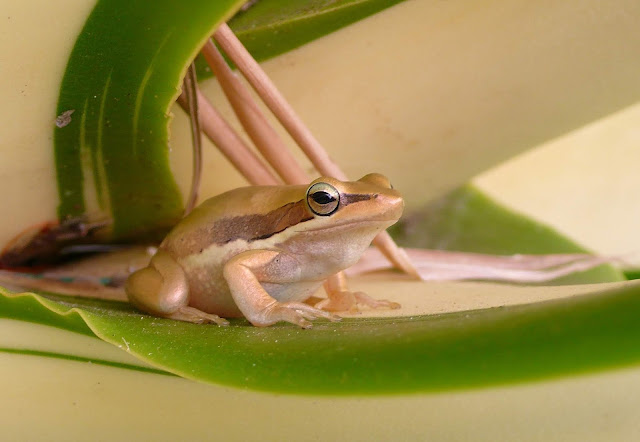 There is a pleasure in the pathless woods;
There is a rapture on the lonely shore;
There is society, where none intrudes,
By the deep sea and music in its roar:
I love not man the less, but Nature more……
(Lord Byron)
These words seem to imply that even Byron in his time had trouble with mankind and today they unsurprisingly reflect closely my own outlook. That strange longing to head off with those eight favourite discs to some deserted island. Most would imagine that to be an idyllic tropical paradise but perhaps with the frequency of hurricanes and rising sea levels something further from the equator and with a few hills to climb would be more in order. 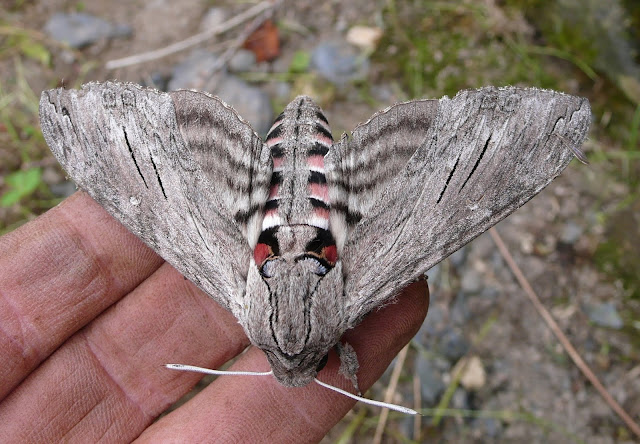 I remember vividly the woodland of my childhood where I could traverse ape like great distances swinging from tree to tree without touching the ground. Today I love nothing better than to leave the path alone and enter the world of discovery. It’s not unusual for me to return from a walk scratched and bleeding, or at least clothing torn from my exploits having taken the direct route up the rock face or ploughed my way through dense undergrowth and brambles. As a child in Oxfordshire I would try and follow the local hunt on foot but soon fell behind, however it was a total delight when I came face to face with the fox who had doubled back along the river. In Western Australia and parts of the Hebrides my great joy is to set off along some rocky coastline discovering hidden coves beyond the far side of the headland and to be observed by the beady eyes of dolphins or the bobbing head of a seal. Those unexpected encounters when nature accepts you back into a far greater society. 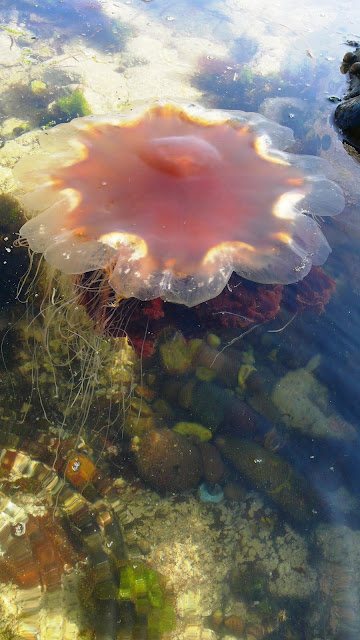 At the far end of the beach at Point Ann in the Fitzgerald National Park, Western Australia I swam with a pod of around fifteen dolphins. On my return I took another dip and discovered a massive sting ray gliding around me in the shallows. Then on my way back up the beach I walked within a few feet of the largest tiger snake I’ve ever seen that had remained partially hidden in the vehicle tyre tracks. A great start to the day. 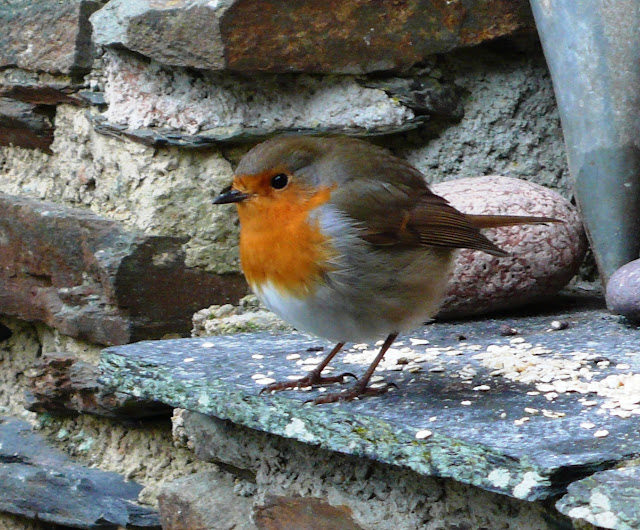 I learnt one summer in France not to leave any cake out on the kitchen table if the door to the garden was open since the robin would be in for a feast. Over the winter I encouraged him with porridge oats and after a few weeks he was hopping onto my hand to eat. Now here in my nearly new studio I have a wren who has taken up residence between the outer larch cladding and the inner insulated walls. For me nature has always been a case of love and understanding while man remains a laughable mystery. 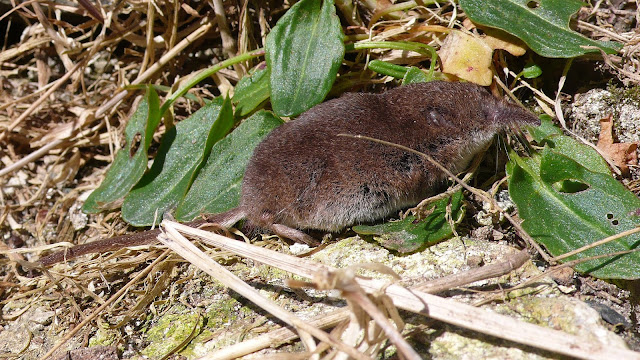 Posted by Hebridean dreaming at 9:21 AM No comments:

Jacob's chair of many colours. 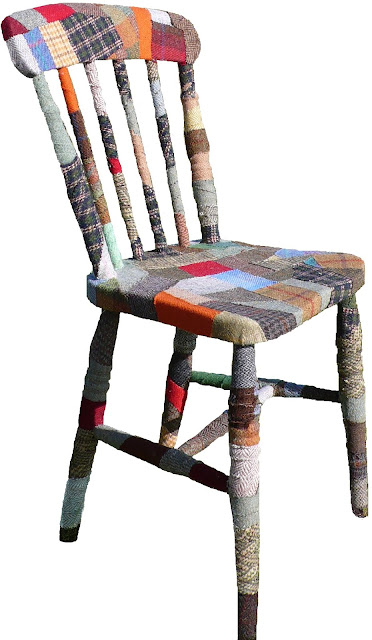 A.R.Hope Moncieff described the Hebrides as having hardly tree to shiver, where docken, broom, or thistle may be the best substitute for a switch, and every drifting log or plank of shipwreck washed up from the Atlantic is treasured to make the rafters of a human nest. A woman brought to the mainland had no concept for trees but giant cabbages; and when a basket of tomatoes came on shore an old Highlander was excited to see “apples” for once in his life.
Even as a child sixty years ago on the Mull of Kintyre our neighbour had never seen runner beans or a real pineapple. Today things have changed and if it’s not available in the supermarkets or shops then you can order it on line. Those who were once human have been relabelled and branded as consumers and behave accordingly creating a hitherto unheard of refuse disposal industry. I do my level best not to support this industry and try to reuse as much as I can even within my own field of creativity. So scraps of tweed reused produce a bag of even smaller scraps. Often during the makeover of an old kitchen to an all-electric showpiece that would see little actual cooking the old wooden chairs that had done good service for decades must now be chucked for something more stylish in chrome and plastic. Combining my small scraps of tweed with one such old kitchen chair and in the best island tradition I produced a colourful and amusing alternative maybe more suited in retirement to that of life in a quiet bedroom.

Posted by Hebridean dreaming at 6:37 AM No comments: 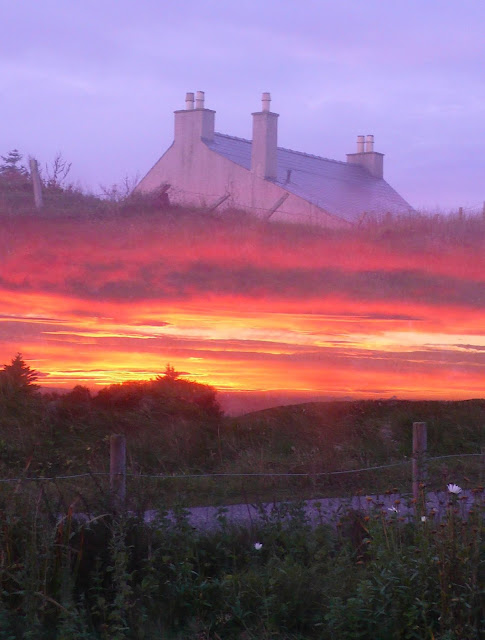 The willow has been stripped by recent high winds and the mantel of late autumn lays over the hillside, a glorious bronzing of heather and bracken. The sunrises shortly before eight gilding the underside of the low cloud coverage. This is the most important part of the day for if you miss the sunrise you risk not seeing it at all. Half an hour earlier I stepped out into a barely discernible dawn to pick a sprig of mint for my tea and shortly after Donald passed silent as a shadow walking the dog. The first thing to register is the wind direction, very important when it comes to taking out the ashes. Whether scattering those from the crematorium or the Rayburn a blow back is never pleasant. Stepping into the dawn I note the reflection in the porch window that sees my neighbour’s house floating impossibly above the sunrise.
As I look to the north I see a lone sea eagle making its dawn tour of inspection along the ridge pestered by two angry mewing buzzards, timing their attack together and causing the eagle to momentarily tumble and redress its vast wings. The close combat mobbing gives scale and indicates just how vast these birds are. 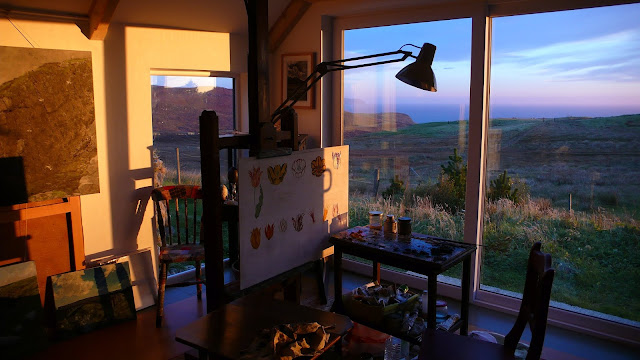 Tea made and I move out to the sun filled studio glowing with the early morning tainting light, no good for painting just yet but it will soon lift and give me the require even defuse light for working. For now I content myself with my coastal view and try not to think about heading south before the month is out.

Posted by Hebridean dreaming at 2:28 AM No comments: 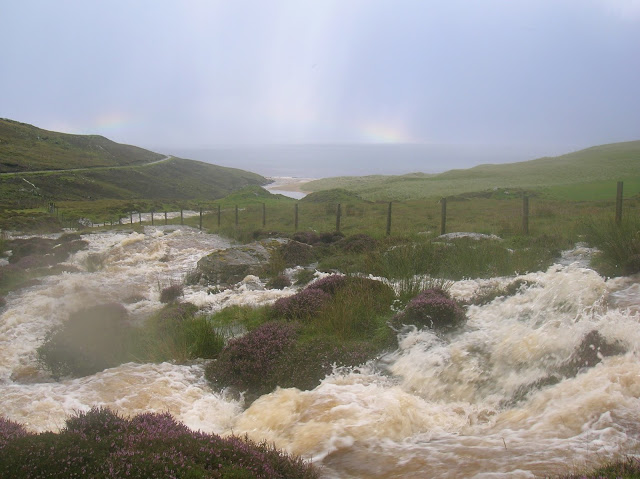 The valley of the mills contains the burn that flows from a five square kilometre area of moorland between the high ground of Muirneag in the west to the beach of Traigh Mhor on the far north east coast of Lewis. Ten or more lochs reside within this collection area but the river can vary from a mid-summer trickle through an autumnal steady flow to a flash flood torrent at almost any time of year. Along the final kilometre beyond New Tolsta these churning peat stained waters fall rapidly through the valley towards the beach where it does salty battle with the incoming tide. For those who know how to read this landscape there are still the remains of two so called Nordic mills along this final stretch of the burn. This east facing seaward valley drops away from the northerly extremities of the New Tolsta crofts and is the view I look out on each day from my studio. 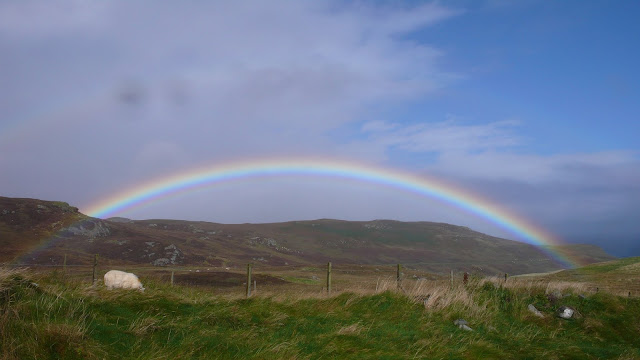 This valley could equally well be called the valley of rainbows for as I sit painting in my studio, outside all manner of intensely coloured rainbows form during days when the shallow autumnal sun highlights sharp showers arriving on blustery westerly winds. The Richard of York seductive arch tempting me in and daring me to render such fleeting marvels in paint.
Even Constable seemed only to include rainbows when they obtained the intensity of doubling as in his water colour of Stonehenge where two seemingly colourless rainbow forms dramatically dominate the sky. 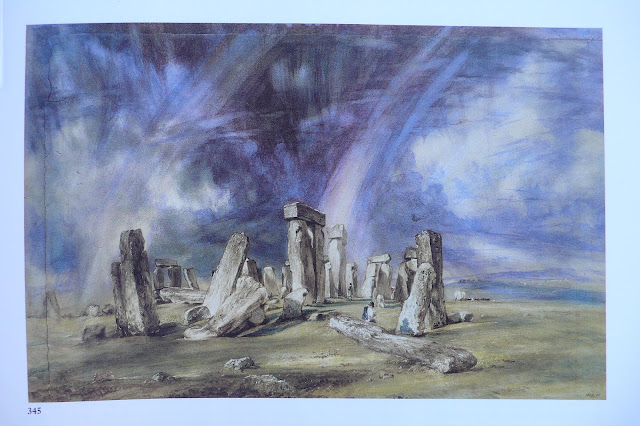 A slightly more colourful rendition appears in London from Hampstead, with a Double Rainbow, but here we see two very small sections of the arch within a shaft of sunlight. 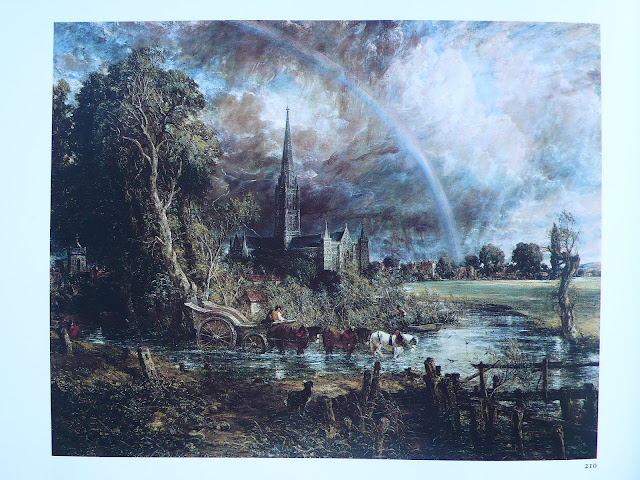 Only in Constables studio set-piece of Salisbury Cathedral from the meadows in 1831 does he attempt a high vault over the spire that is achieved by using the paint at the opposite end of impasto like water colour thinned to a soft veil. JMW Turner was in my mind the greatest master of dramatic lighting but even he seemed to side step the rainbow rather than fight battles in vain. 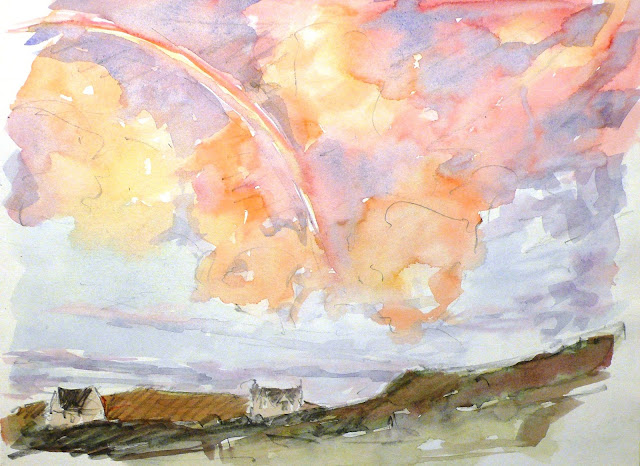 One of my own water colour attempts.

Posted by Hebridean dreaming at 2:19 AM No comments:

Giving it the red carpet treatment. 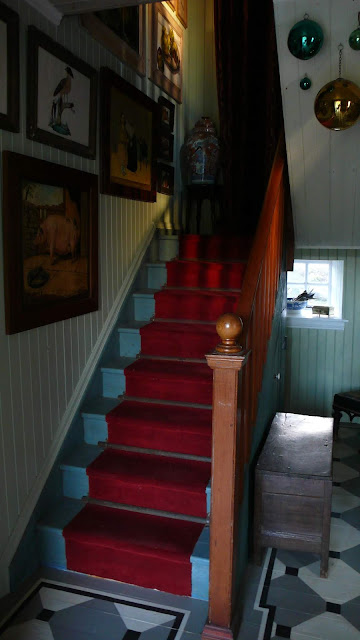 Having just finished brushing down the stairs carpet I asked myself why I should find this particular part of house cleaning so satisfying. The answer was staring me in the face, (no pun intended) and it was the carpet itself that was the source of my pleasure. The deep poppy red short pile from the iron oxide end of the spectrum rather than a carmine or crimson cochineal red has been familiar to me throughout my life. It was there in dining room of my parents 1926 Lorimer arts and craft house on the Mull of Kintyre and when we moved south in 1961 it found a place in six out of the eight houses they lived in. It had been made in a narrow weave for stairs or corridors but later my father had joined it together with a backing of copydex and webbing. It failed to find a place in their final home but was rolled up safely in the barn where I rediscovered it. My croft house in Tolsta needed stairs carpet but these strips were too wide. Having looked at the price of new carpet I got out the Stanley knife trimming it to size and gluing the cut edge. It’s now been down for ten years and shows no sign of wear. The satisfaction I get is in seeing that my red carpet has already seen 90 years of service and will probably do as many years again. So what modern carpet could be expected to do such service? By equal good fortune I also have some of the old red velvet curtains from that Kintyre home and one pair now graces the parlour window. I still recall the Christmas of 1958 when these curtains were used to dramatic effect. We were ushered into the sitting room where the fire had been lit and the curtains across the bay window remained closed. My brother and I were told to go and draw the red curtains and there we discovered an entire farmyard of grey buildings with green roofs that my father and half-brother Bill had made in secret.  Another pair of these curtains I used to cover an easy chair in my bedroom, a chair that came originally from the croft house but was destined for the local skip. While my wonderfully over the top mahogany half tester bed (somebody else’s throw out) received a refurbished and relined pair of red velvet drapes. It is important not to confuse reuse with that of up-cycling. Reuse implies using some creative skill to bring back into service some tired and seemingly useless item, while up-cycling is the painting of old mahogany, oak, ash, chestnut, cherry, walnut, rosewood or elm furniture an off white, pink or lavender in the hopes that it will look less conspicuous alongside the flat-pack items. 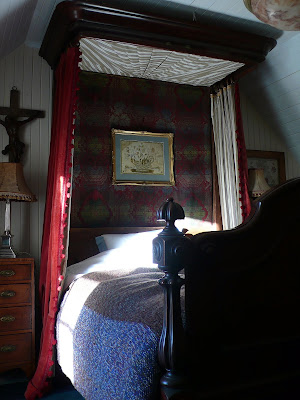 Posted by Hebridean dreaming at 9:46 AM No comments: