Mid summer in May.

The peat cutting is complete and there is no question of not deserving these balmy hot days where sky and sea seem to have merged into one continuous palette of blue through Prussian, cobalt to ultra marine, or that we will have to pay for it later when August comes raging in like a bad tempered bull. There is rather an understandable need for sun a topping up on vitamin D after a long dark winter. The cuckoo heralds another sun soaked Sunday, bumble bees atop dandelions the air still and blessedly free from midges. In Tolsta church at eleven o'clock the 25 faithful chant the psalms in Gaelic while the rest search through drawers for shorts and bathing costumes and where did the plastric cups go for the picnic set? This is a day for total immersion, drenching the uncreamed lilly white skin in full sun, why else would they call it sunday? Down at Traigh Mhor beach those making a day of it have already filled the limited car parking and by mid day they are parked along the road side and passing places. Already after nearly a week of this weather there is talk of how long will it last, perhaps to mid week and that adds a certain urgency to enjoying the day. By two the massive sands of Traigh Mhor are lightly sprinkled with people some strolling in the shallows trousers rolled up, other playing football on a full sized pitch while toddlers toddle towards the calm waters edge. I strip off down to my underwear and head for the gentle lapping of the millpond Minch. Having little insulation my swim is short sweet and exhilerating. More arrive through the afternoon while other roast a lobster pink and they at least will pay for it tomorrow.
Posted by Hebridean dreaming at 3:51 AM 1 comment: Having spent the first ten weeks of this year down under in Western Australia coping remarkably well with temperatures in the mid to high thirties I was now prepared for a taste of winter before headfing into another summer. The most pressing job at this time of year is to cut peat and while expected to be quite likely doing this in the rain I did not expect hail and near freezing conditionsin mid May. A bitter North Westerly made life uncomfortable but then again anything is possible with five layer of clothing plus thermal underware apart from sex.
Last Sunday gale force winds were at least to unexpected as I spent most of the day close tio the Rayburn working on the next batch of feather bird pictures. Radio 4 had given no real warning but as I ventured upstairs I was unprepared for the racket from the roof. The timber interior of the house was creeking a it physically changed shape being squeezed like a pair of bellows before the relentless winds that hit the back of the house and sucked at the front in a rippling Mexican wave of clattering tiles. I opened the curtains and peered into the darkness, rain lashed at the windows but no water showed within so I assumed the tiles were still in place. I climbed into bed pulled the covers over my head, forced my finger into my ears and drept a fitful sleep of flying houses and a dog called Toto. 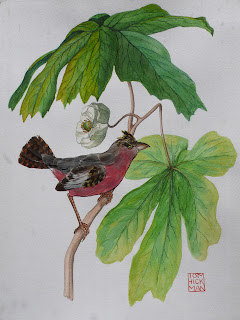 Lifting peat is a seriously strenuous job gurenteed to keep you young or kill you. Normally this is done by two people, one cutting while the other throw the peat out onto the heath to dry flat. I find a rhythm of work and it becomes like a massive art installation of fresh smooth peat that hasn't seen the light of day in thousands of years. In this far flug place my body has become acclimatised to the cold and I find myself grinning with the pleasure of simply being here, an island suits me well feeling insulated against the wider world even though I know that is only a feeling.
Posted by Hebridean dreaming at 2:57 AM No comments: