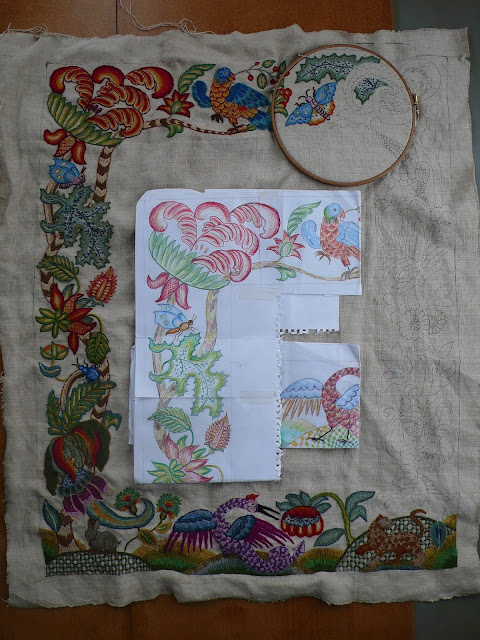 The inspiration for a crewel work embroidered mirror came from a fine 17th century fragment of bed hanging that I discovered behind later coverings on a Victorian fourfold screen. The embroidery takes the form of a tree of life with wonderfully exotic flowers and leaves and now forms the central part of my mass hung stair well display. Having been shut away from the light for many years the colours remain vivid and when comparing this to another fabulous fragment of similar size in the V&A museum I preferred mine.  During last winter’s trip to Western Australia I spent a couple of days working out the design. Some years ago I had discovered out in the loft space of my father's barn a 17th century carved pine frame that would now be perfect size wise as well as date wise for the mirror. The needlework was to be a 12cm strip between the outer frame and the finer new inner frame. 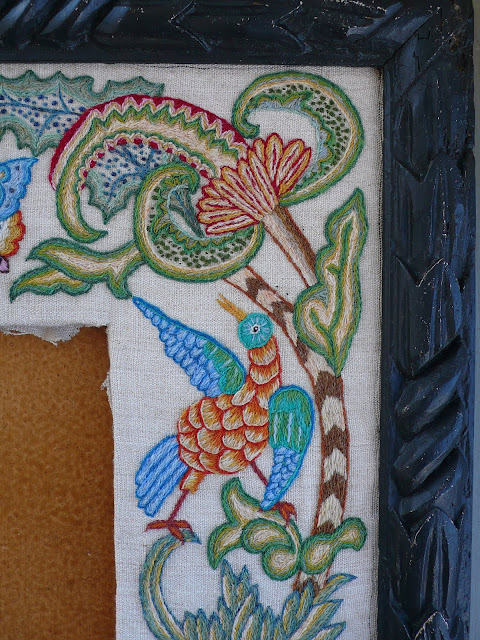 I had discovered on scraping back the layers of paint that the original colour of the outer carved frame had been black and decided that would be ideal as a clean contrast to the background linen. The stitching work began on my arrival back in Brittany and continued during the journey north to the Isle of Lewis. As with all these stitching project it is simply a question of time and now five months on and the stitching finished, all the elements have fallen into place and the mirror is complete, another (price on request) item to be shown throughout September 2019 in a major exhibition of my work over the past quarter of a century at An Lanntair, the Stornoway art centre. 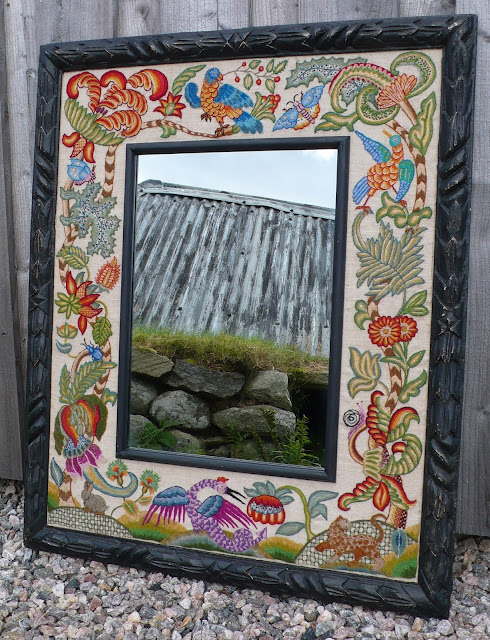 REMEMBER YOU SAW IT HERE FIRST. 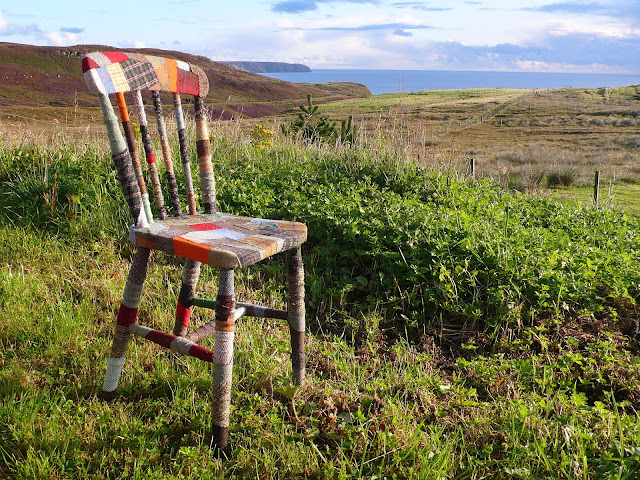 Summer has passed with the last bottle of elderflower champagne drunk and condensation appearing on the inside of the single pane sash windows the morning chill of autumn is upon us, my favourite time of year. The heather is a deeper purple on the hillside, the bracken turned bronze and the swedes are sweet and full. Supermarket shopping is less frequent and spending reduced with potatoes to lift and plenty of green kale. Having chased the last persistent bunny from the property I now discover I have another visitor. The mink are back which may explain why the rabbit no longer calls. I’ve set two traps in the hopes of catching a fur hat for the winter. In the studio lighting of the fire has become the morning routine and it has been a productive time with long term stitching projects completed and painting in full swing. There has also been time for the frivolous thinking and the using up of scrap tweed on the kitchen chair. Remember just like the tweed coat hangers you saw it here first. 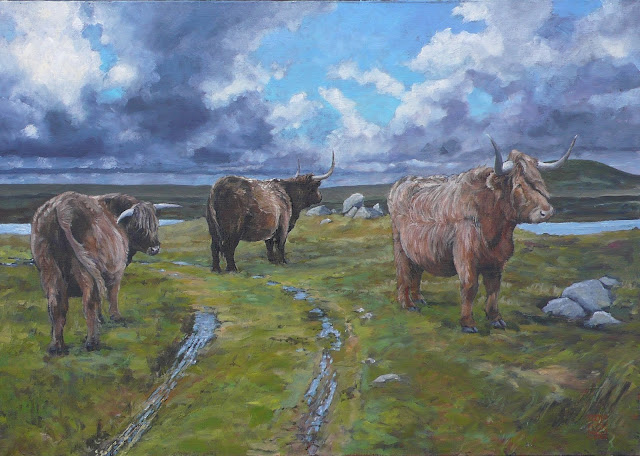 The term chocolate box when referring to a painting is perhaps the harshest of all critical put downs. However even Van Goff’s work has appeared on confectionary box covers as well as being transformed into jigsaw puzzles and deformed into paint by number kits. I somehow think those who pay tens of millions of pounds for his work would not appreciate their prized possession being referred to as chocolate boxy.
Thirty years ago my first exhibition proved a sell-out show featuring mainly Breton dairy cows. I made up my mind there and then to stop painting cows fearing I might become known simply as a cow painter. Twenty years on people continued to ask me was I still painting cows, so now I figure if you can’t beat them then you might as well give them what they want. Last summer I was intrigued to see in a Scottish Art Gallery window a large painting of a highland cows head. The poor beast had been coiffured about the fringe so as to reveal two sad staring eyes. In reality this never happens unless a sudden gust of wind flicks the facial top not to one side. Then on looking further into the gallery I spotted another head or rather half a head, which had the added bonus that the artist did not need to reproduce a perfect matching pair of horns. As well as varying in colour from black to blond the most common being ginger, highland cows horns can also vary considerably from horizontal when young to a magnificent handlebar pair. 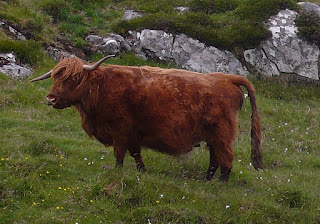 This unfortunate deformed beast with one horn growing up while the other turns down was spotted on North Uist and as such would not have passed the beauty criteria for being a suitable artist model. I ventured into the gallery for a closer look and overheard the gallery attendant on the phone clinching the deal for the head in the window at £900 to a German tourist. Wow I thought, I must get me some of that chocolate.
And so over the next few summers I stopped whenever possible to study the great lumbering beast. Either they are incredibly dim in their slow trudging gait and reluctance to stray from their intended pathway along single track roads and oncoming traffic, or they house some serious intelligence within that shaggy head as they turn slowly knowing that their plodding pace of life holds far more depth than the scurrying humans intent on getting a photo from the car window. As the summer season drew to a close I returned to the easel with my sketches and found enjoyment in giving life to some fine specimens. 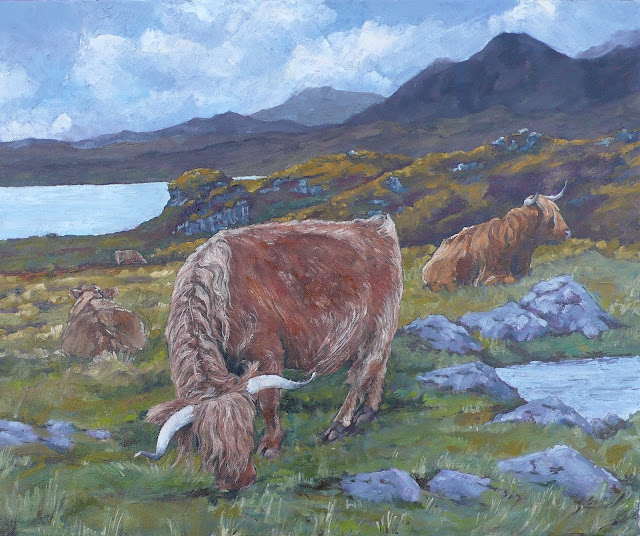 Posted by Hebridean dreaming at 2:22 AM No comments: