BIRDS OF A FEATHER.

Two days after I arrived back in New Tolsta the east end of my peat stack fell out and revealing the remains of a birds nest. As I bagged up the peat I discovered one light blue starling’s egg amongst the dried grass and the parent birds watched from the ridge of the barn roof mimicking perfectly the clucking of chickens, the mewing of the buzzards and the chatter of sparrows.

For the second year running the gold finches have nested in the New Zealand holly. There is always an added sense of pride when birds choose to nest in shrubs that I have planted, particularly when those shrubs have taken ten years to get to bird nesting proportions. In late September last year I saw the entire family of finches perched on my washing line. There has been a program of eradicating mink on the island due to the devastating effect on ground nesting birds and to a large extent this has been successful. If mink are considered vermin then the same classification must be afforded all feral cats and pet cats that are allowed to roam and hunt. Twice in the past week I’ve chased off a rather mangy looking cat that has ambled up the croft into my garden. I have no problem with it hunting rabbits but I fear for the ground nesting birds on the machair. Cats have more freedom than any other living animal on this planet. My half-brother’s three cats from Florida were allowed into the country but his wife was not, even though she receives an English pension. Cats have the right to roam anywhere, can scrape up your newly planted seeds and use your garden as a latrine, while their owners consider this amusing. High on my bucket list is to own a Davy Crocket hat made from a nice fluffy moggy with the grinning face out front and tail swinging at the rear, so much more than simply a fashion statement. 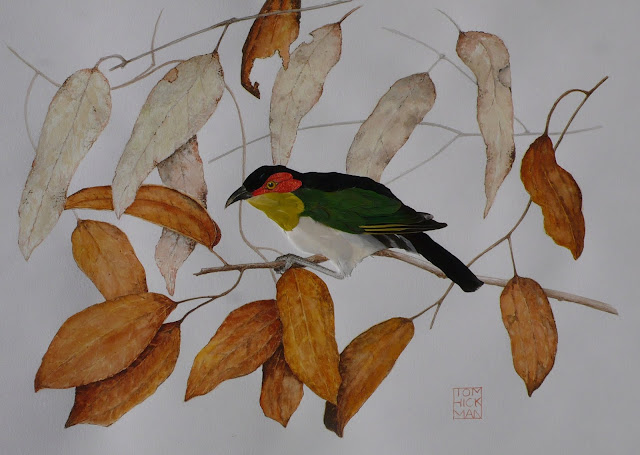 During mid-May the cuckoo is in fine voice from dawn to dusk and due to the lack of trees is very visible perched on the fence posts or atop the peat stack. It’s the male that gives the familiar call and I have often wondered why it needs to cuckoo quite so much. The other day it flew past whilst calling and behind it was a tiny bird flapping furiously trying to chase the much larger bird away. It crossed my mind that this might just be a decoying tactic by the male bird so that the female can sneak in and lay her egg in that little birds nest. Opposite my house is an abandoned plant nursery area and with its dense small tree growth it has become a haven for birds, hence the cuckoos. 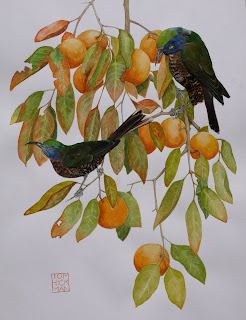 This week I retrieved two large bags from my neighbour’s freezer containing my collection of feathers. I’d put them there as a precaution against any mites before starting work on a new series of feather bird pictures. While in Western Australia last winter I painted twenty water colour botanical backgrounds that now await the addition of the birds. This is a fiddly business requiring to be carried out in draft free conditions. As the feathers are trimmed ready for gluing into place there is fluff everywhere and sneezing must be avoided at all costs. Whistling along to Strauss’s Blue Danube can prove fatal and while a stiff breeze blows in from the east all windows and doors are closed in the studio. 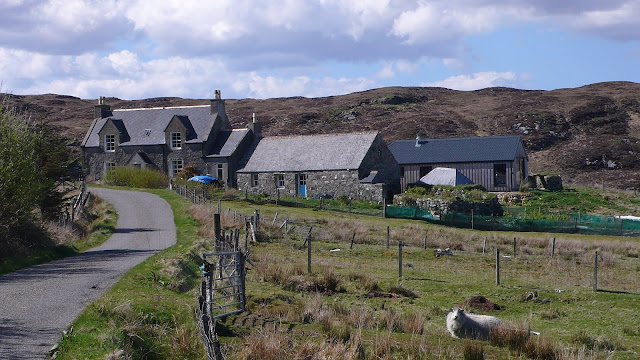 I arrived back in New Tolsta a little over a week ago and as usual my feet have hardly touched the ground with all that I want to see and need to get on with. There is rhubarb to pick and chutney to make, soil to be dug and shrubs that need pruning, turf to remove and peat to cut, fires to light and back doors to unjam. I looked for damage from winter storms and was relieved to discover nothing serious. The rabbits have been in nibbling and digging so this time I decided to install a rabbit proof fence around the perimeter. Shrubs and tree (small trees) are beginning to sprout as the days become seriously long and I try to contain my child-like excitement for the plant kingdom. This is the time of year when change in growth is visible on a daily basis. 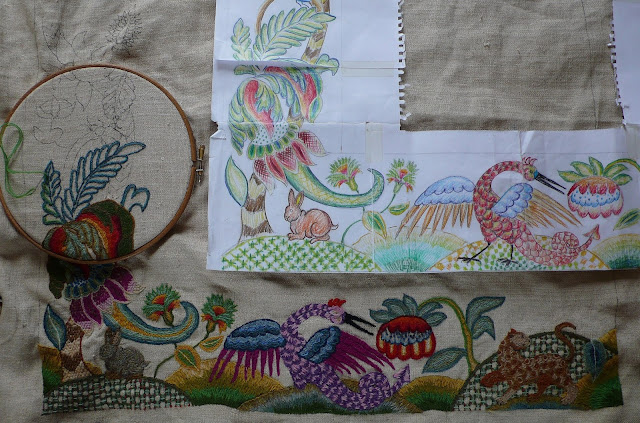 I can’t remember a time when I didn’t have a project in hand and having already done the design work for a cruel-work mirror frame while in Western Australia I was keen to get started. The background is once again untreated French linen but the tight weave is already proving punishing on the needle and my fingers.
A dull start to Sunday morning saw me in the studio continuing stitching the mirror frame but as mid-day arrived and a large sea eagle cruised along the ridge I realised the sun had broken through and a walk was in order. Down in the dunes behind Traigh Mhor beach the scent of primroses greeted me and a surprise on the beach to see a change in the course of the river. 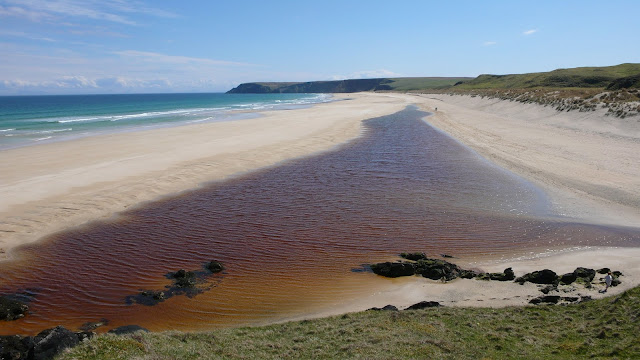 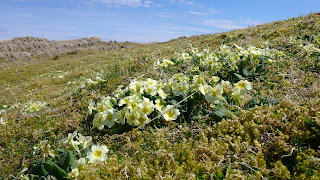 Winter had pushed up a lot of sand and blocked its normal direct pathway to the sea so that now it turned sharply southward eventually finding its new exit several hundred yards down the beach. Making my way back up across the machair I heard the familiar mewing of a buzzard overhead, a call that I associated with its nest being close by and sure enough there above the burn was a small mass of dry sticks. I climbed round to  get a closer view from above and saw two eggs, one much lighter but both of characteristically round form. So it has been a change of nesting site this year having perhaps been pestered by the sea eagles in previous summers when they nested up on the ridge or by wind farm machinery when nesting in the quarry. 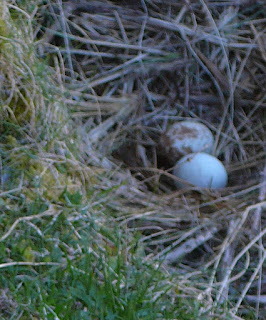 Much of this week has been spent sorting out the house and garden, having brought some of my favorite pictures to hang plus my French walnut bed for the second bedroom, assembled just in time for the first guest. In the garden I’ve planted potatoes, peas, carrots, lettuce, kale and broccoli and the gooseberries and blackcurrants are in full flower. The strawberries will require some protection but are already showing more promise than last year and so the unchanged rhythm of my Hebridean life resumes.