Hebridean Dreaming: STUDIO PAINTING: During the past fortnight I’ve returned more towards the paintbrush than needle. The major project to embroider flora and fauna on the N...
Posted by Hebridean dreaming at 12:38 PM No comments: 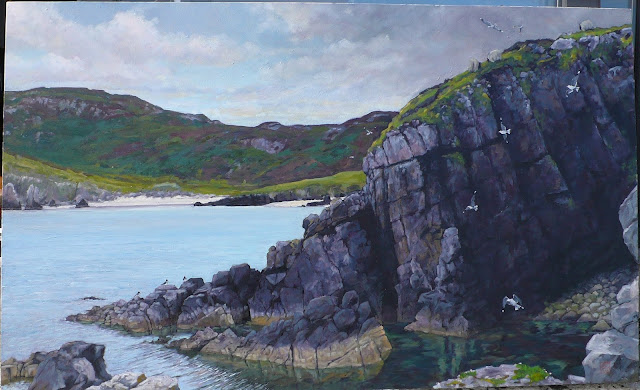 During the past fortnight I’ve returned more towards the paintbrush than needle. The major project to embroider flora and fauna on the New Tolsta map quilt has seemed such an open ended task that some light relief of painting where I can complete a picture in a matter of days was a welcome bonus. Even when I’m not painting the process still goes on in my head as I imagine various subjects and compositions. There are some that are as well to rest in my head and never to emerge but there are others that I am itching to get onto canvas, and when they do eventually come into the light of day there is a great sense of joy with just how quick that image arrives. Painting should never be difficult or laboured as it will always show in the unsatisfactory end result. If during the painting process I find myself struggling with the image then I take a tea-break or a walk and usually on returning the problem is resolved. However there are times when the problem remains and the picture must be abandoned. This is rare and usually only happens after a sustained period of studio painting when all I need to do is get back out there and reconnect with the subject matter; a walk down to the beach or a trudge out onto the moor whatever the weather. It is hardly surprising that the subject of Garry beach figure often in my pictures as I not only walk there but work there when cutting peat. Familiarity with this delightful east facing beach and the history of past human habitation and activities are intriguing but the play of light during changing weather conditions make it endlessly fascinating. Being a popular place for camper van tourists and dog walking locals it is important for me that I don’t simply reproduce the classic snap shot image that everyone will recognise. I have sketchpads full of drawing of Garry to accompany a large folder of photographs and I often find myself working from several different images. My latest studio painting was executed using three sketches and two photographs with an element of artistic licence to create the required composition. 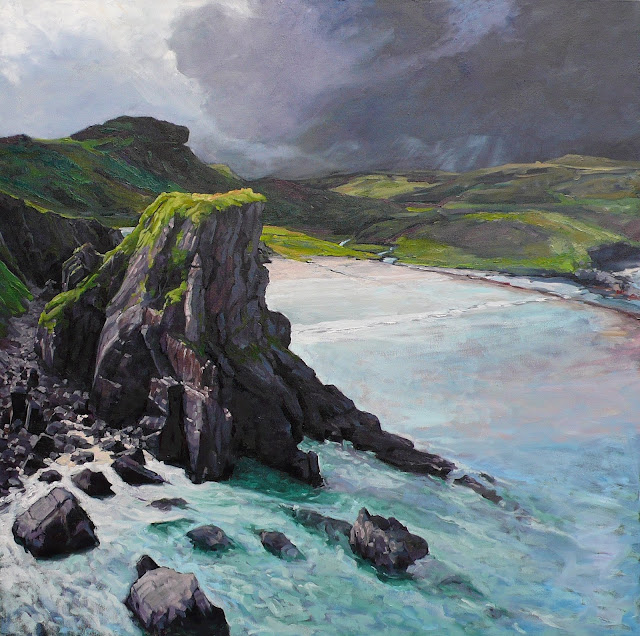 The painting of the castle stack taken from the far cliffs demanded a similar mix of sketches and photos and the more restricted square format meant that the subject matter remains very much about the elevated perspective of the stack and its relationship to the silhouette of Seabhal beyond. 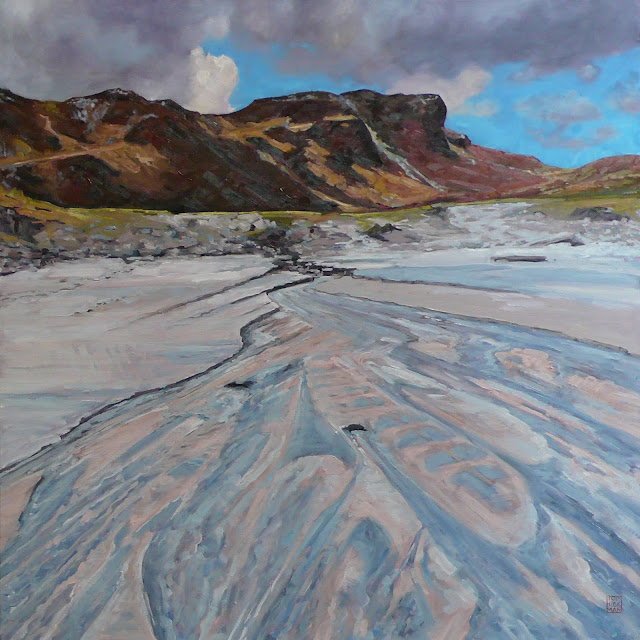 The slightly smaller square painting looking up to Seabhal from the beach is more about the patterns formed by the burn running across the sand from the loch.
Another favourite with all visitors is the “bridge to nowhere” although being an entire bridge it does in fact go somewhere as it spans the deep granite gorge. 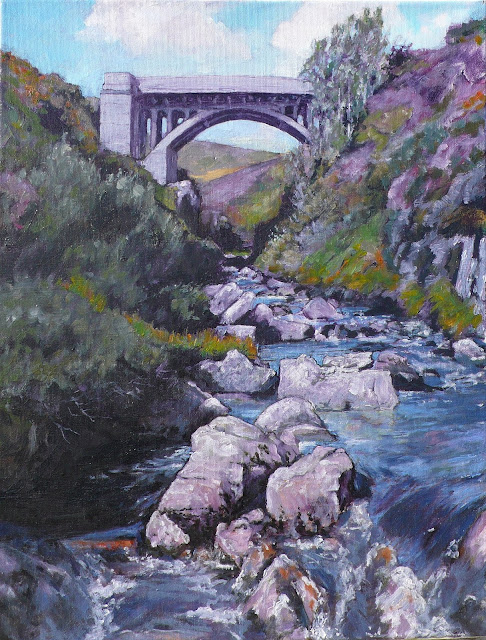 To obtain the impressive dominance that Lord Leverhume intended when choosing this site for the cast concrete bridge one needs to view it from down in the gorge at river level which means a scramble and then locating a comfortable rock to perch and sketch from. This is not a suitable place from which to set up an easel so the subject seen from this angle requires it to be a studio painting.

COMPLETING THE PICTURE AND THE GENTLE ART OF FAKING.. 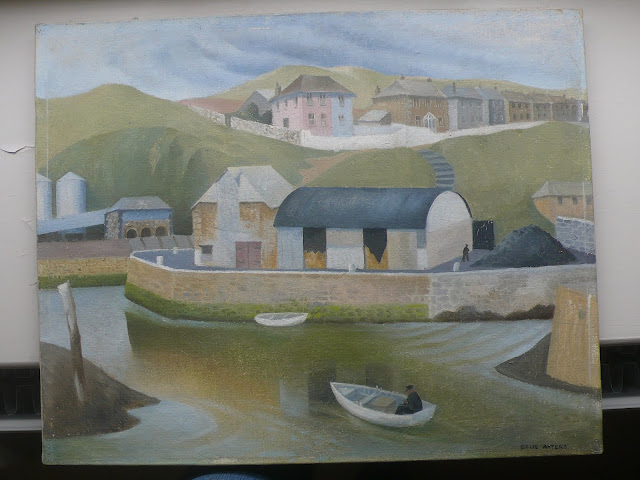 Back in the summer of 1987 my father bought an oil painting by the Cornish artist Billie Waters and it was quite obvious even without reading the auctioneer’s description that it depicted Hayle harbour. Although somewhat stylised it showed clearly the old factory buildings and storehouses plus the distinctive row of houses that still stand above the inner harbour. The style is typical of between the world wars and I could immediately see how the deceptively simple almost child-like image had caught my father’s eye. The subtle soft pallet of colours indicated the brushwork of a female hand and it soon found a home on the upstairs landing. On the reverse of the canvas was another abandoned oil sketch of a harbour and what I took to be a view of Hayle harbour from a different view point. The rather heavy half round moulded frame did not please my father and it was changed for something lighter, while making sure that the original was stored safely away. 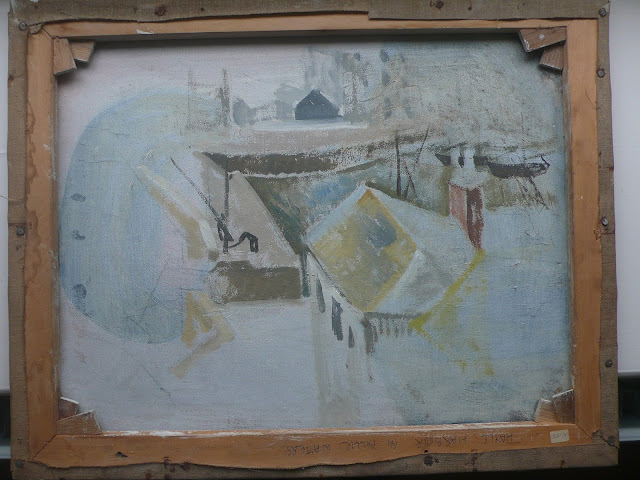 Thirty years on and the painting hung in my brother house having been reunited with its original frame and I was once again intrigued by the abandoned sketch. As I was going to St Ives the following day I took a photograph and when stopping off in Hayle to buy a vegetarian pasty would take a wander around the harbour area. With pasty in hand I walked in and around the harbour taking in all the most likely spots but nothing fell into place and it became obvious that the sketch was not of Hayle. Cornwall is well off for harbours and I began to think it was an impossible task to now make any sense of the sketch, so I logged the image away in my head and thought no more about it. 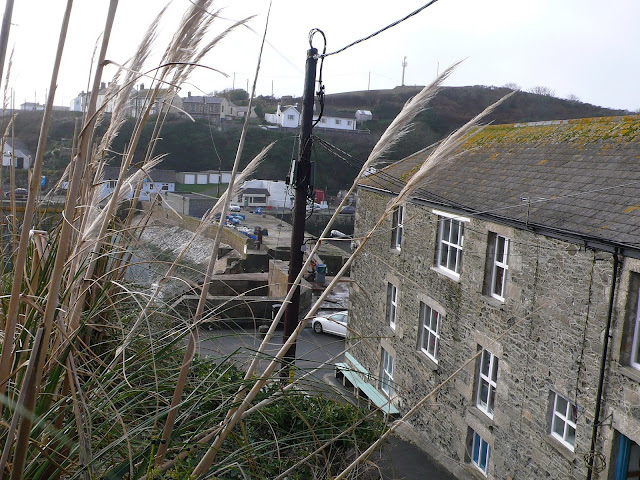 A full year passed and on a stormy winters day I was invited with my brother down to Porth Leaven for lunch with a friend. After a delicious lasagna lunch we battle against the wind down to the harbour front and as we arrived alongside the outer entrance it all slipped into place. That logged Billie Waters sketch came back to me and I rushed up the side street with camera in hand to take some shots of where thought it might have been drawn from. My memory had not failed me and it was obvious that the sketch was indeed of Porth Leaven harbour. It took another visit to locate more exactly the original observation point as close to the old war memorial and at that point I knew that I had to complete the painting. 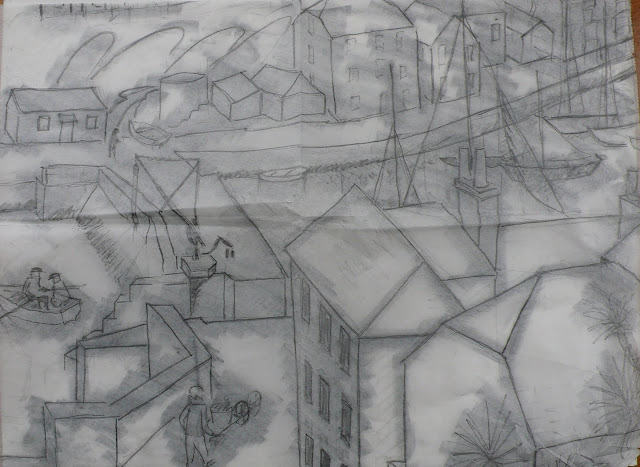 I took a tracing of the sketch as a guide and tried to interoperate every possible relevant brush stroke and with the aid of my present day photographs I completed the image. One thing still puzzled me with the south facing façade of the central foreground building in that in the sketch it was painted white and there were only three windows on each floor. On examining the building it was obvious that two larger windows had been added on each floor, but was it ever white? Researching some old black and white photos indicated that at one point the building had indeed been painted white. So this modern trend to paint everything white including natural stone is not an entirely recent thing.
Billie Waters had abandoned that sketch probably eighty years ago and it was now my task to complete the picture. After three days I felt I had arrived at a passable effort that would sit comfortably alongside the original making a pair to Hayle harbour. 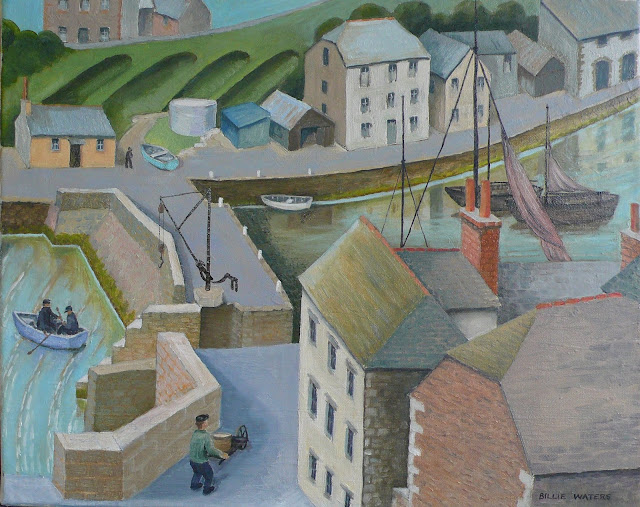 The story however is not entirely over because while the oil sketch of Porth Leaven was clear enough there also remains another partial sketch beneath this. The most obvious part of the second sketch is a large blue oval body of what looks like water to the left with three black splodges. There are other indications of brushwork that have been whited over and bare no relation to the harbour sketch but I can as yet make little sense of these other than it could be an attempt from closer quarters to capture the flow of water out of through the inner habour wall. Could this yet turn out to be three for the price of one?

Posted by Hebridean dreaming at 7:27 AM 2 comments:

Cooking on a quiet Sunday. 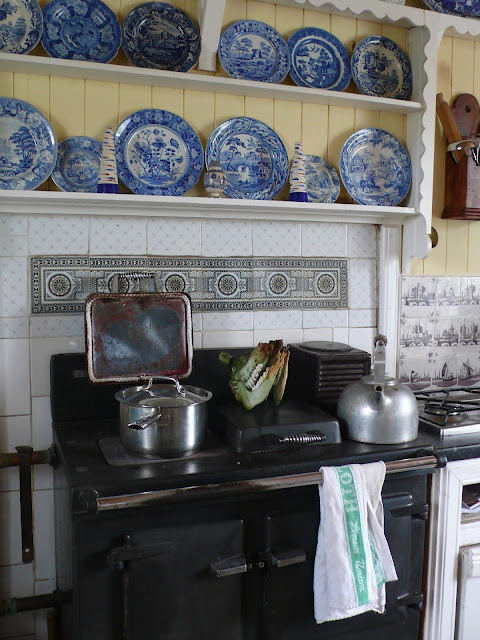 I try to make it a rule to always cook something when the Rayburn is lit. Even on a cold wet miserable day when it would seem enough effort simply to allow it to heat the water and radiators I like to get something in the oven. On inspecting the larder there was ample cake on the shelf, the biscuit tin was full and below the jam and preserves looked healthy. 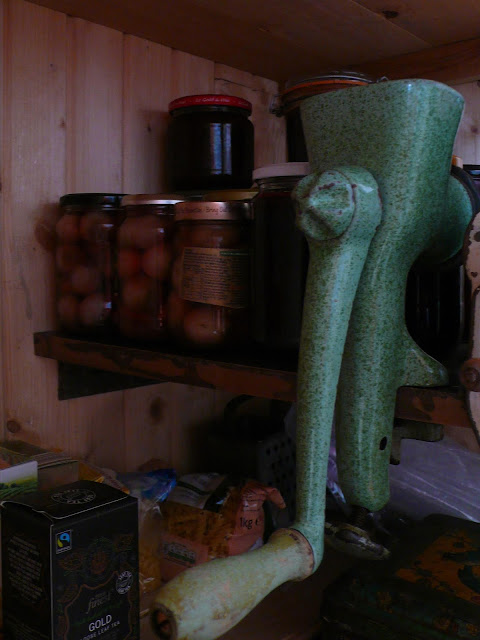 Then as I admired the wonderful sponge mincer that I’d picked up for a pound years ago an idea sprang to mind. I’d make kale and potato cakes as I had both in the garden and maybe I could try mincing the blanched curly kale and brown bread. It worked a dream and I have enough for the rest of the week. 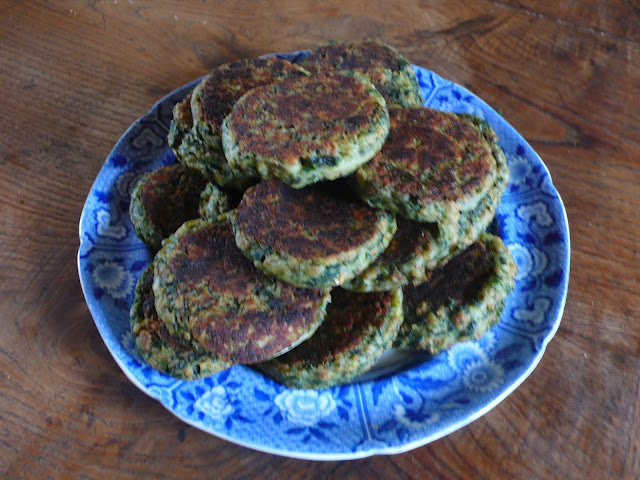 Don't you just hate people who take photos of food! Traditionally they are served with cold gammon, or with bacon or grilled sausages but unless some road-kill turns up I’ll be sticking to the staple vegetarian mushroom and cheese omelette. I had the remaining mushroom soup at lunchtime, made with field mushrooms that I’d filled my bonnet with when down sketching on Garry beach. I can guarantee here in New Tolsta that any fresh mushrooms are mine by rights or more accurately because I’m the only one who would dare eat anything that didn’t come in a plastic supermarket wrapper. “I’ve only poisoned myself once” I say with gay abandon and see them determined to politely decline any invite to dine at Tom’s house. This year with the dry summer I gave up bothering with growing lettuce as I now prefer the lemon tang of wild sorrel that grows here in abundance. I’m also celebrating not buying any jam having been self-sufficient on that front for the past thirty years.
Having finished cooking I put the scrubbed deer’s head on the Rayburn to dry. A neighbour had found it on the moor and brought it round for me in the week. Wonderful that the sight of a dead skull should immediately make people think of me.

Posted by Hebridean dreaming at 9:42 AM No comments: