During the depths of this very soggy winter I have undergone a self enforced hibernation. It started with a candlelit Christmas very romantic but none the less rather dim as a working light, after four days when the electricity was eventually restored I marvelled at just how bright even a forty watt bulb was. Having retrieved the contents of my freezer from friends who had retained power a few miles away I had all I required to close down the outside world, no phone or internet connection and I let friends know that Mondays would be visiting days should they wish to check on my progress.
Upholstery was to be my indoor occupation and during the first few days it was finishing off the re-covering of a late 19th century easy chair that I had acquired from a pile of discarded furniture at the back of a West Country saleroom.
A double drop ended Chesterfield settee that came from the same free source will this summer be going up to my house on Lewis and miraculously will match the parlour curtains. To cover the chair I used the “Gothic Arches” fabric printed by Stothert and Miles back in the late eighties copied from a rather ragged old quilt I had purchased for the outrageous price of £20. Having got into the rhythm of upholstery I pressed ahead with a few more jobs I had put aside for a couple of decades. The first was a wreck of an elm armchair that had during its heyday been the pride of someone’s parlour but for many a year suffered in silence in the corner of my bedroom beneath layers of rotting rexine. The seat had been stuffed with any and everything; hay and straw, newspapers, old invoices and an ancient pair of bloomers. The remains of a rather fine pineapple pattern single early Victorian curtain proved ideal in returning this fine old chair to its former glory. In the swing of it now and having had my sowing machine serviced I set to making new covers for the mattress cushions of an iron fold out chair that had for many years served in my studio to recline the occasional nude model. Fourth on the list came a chair that had been given to me twenty years ago and which even back then require serous attention. Now its prolapsed seat showed springs protruding through rotten webbing and the entire back had slumped into a very unflattering sagging posterior. From the outset this was always going to be an entire rebuild as the lumpy back stuffing revealed itself to be little more than a rats nest of kapok and hay. I knew one day I would find a use for the old kelim carpet but when it came to chopping it up I discovered even that required some repair. 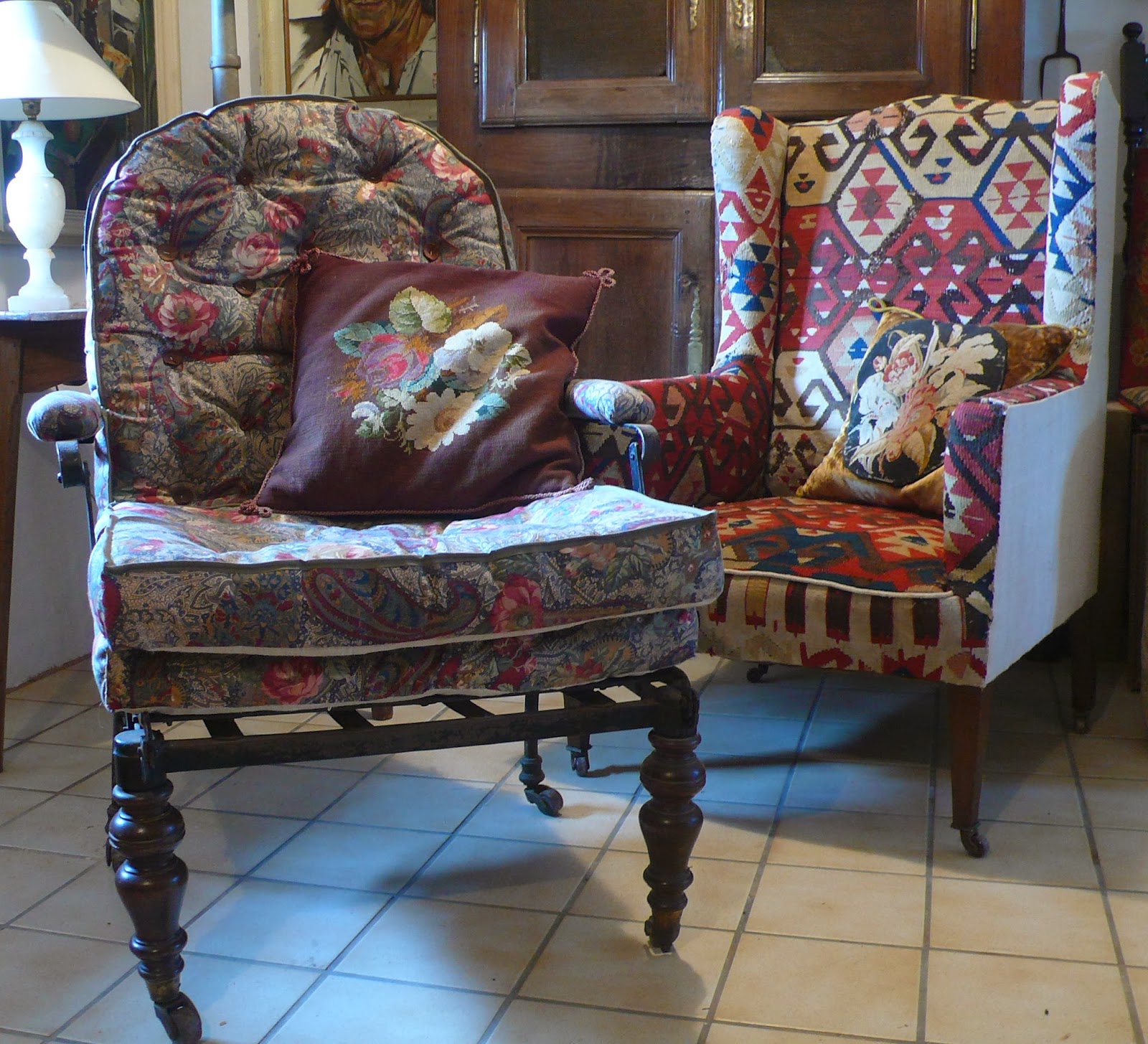 The exterior faces were done in old 19th century linen; an entire unused roll found on the tip, and although it took well over a week to complete the end result was very pleasing. I find that variety is always a good thing and so interspersed with upholstery I continued my shell work with the biggest arrangement of shell flowers under dome to date. There are well over a hundred flowers and many of these flowers consist of between forty to eighty shells, so one could say it’s a labour of love and in the way that love can often resemble madness by an observer so this work seems to send me a little strange simply with the concentration required. Other objects d’art were two obelisks, one shell encrusted and the other clad entirely in old mercury mirror. 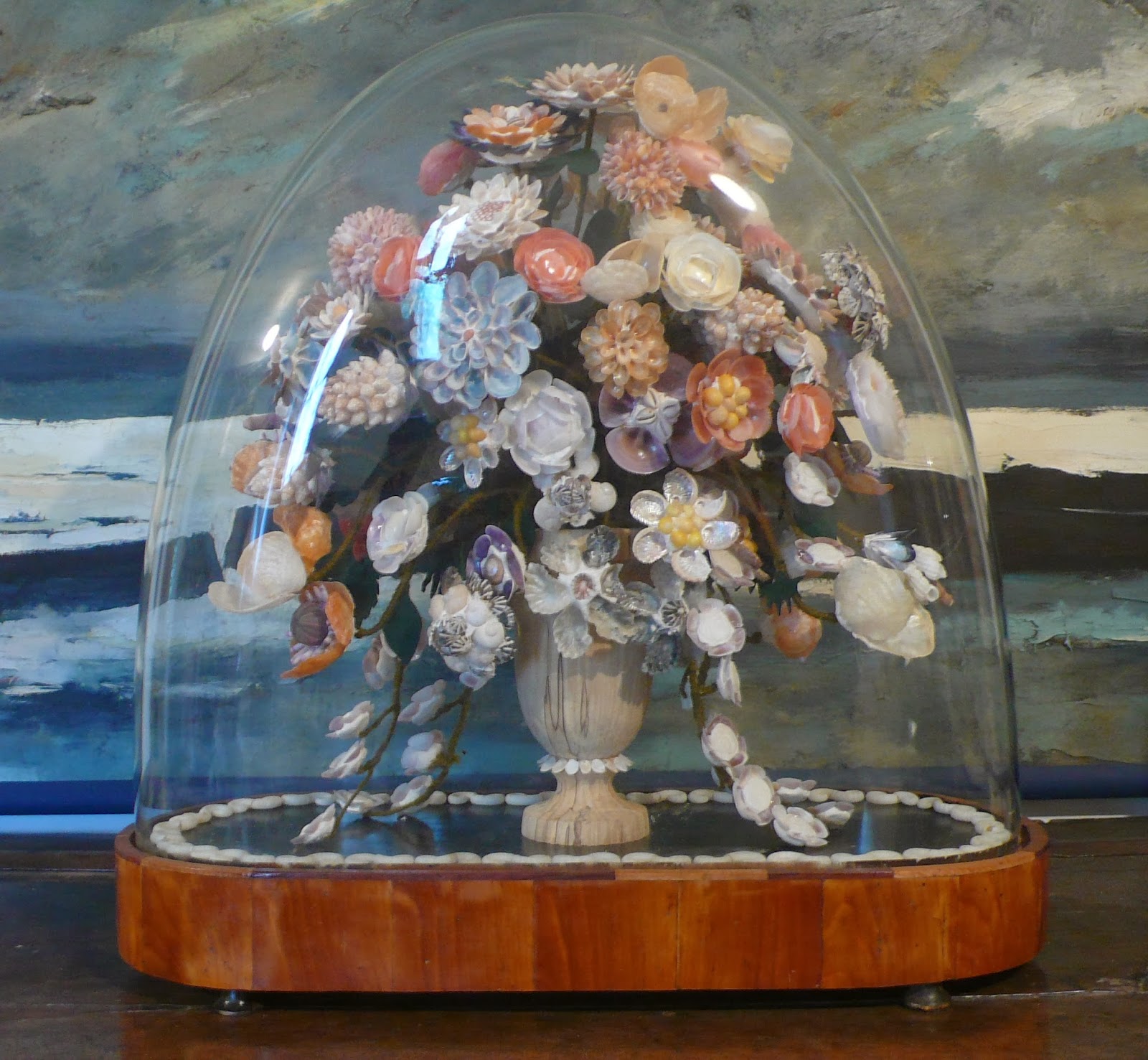 And during these long dark TV free evenings I sort through the many sketch books I’ve filled from the Outer Hebrides and piece together a travel diary in the hopes of getting funding later this year to go into print. Drifting through the islands I meet and observe many fascinating people but those who impress and stay close to the surface of my memory are often the elderly. 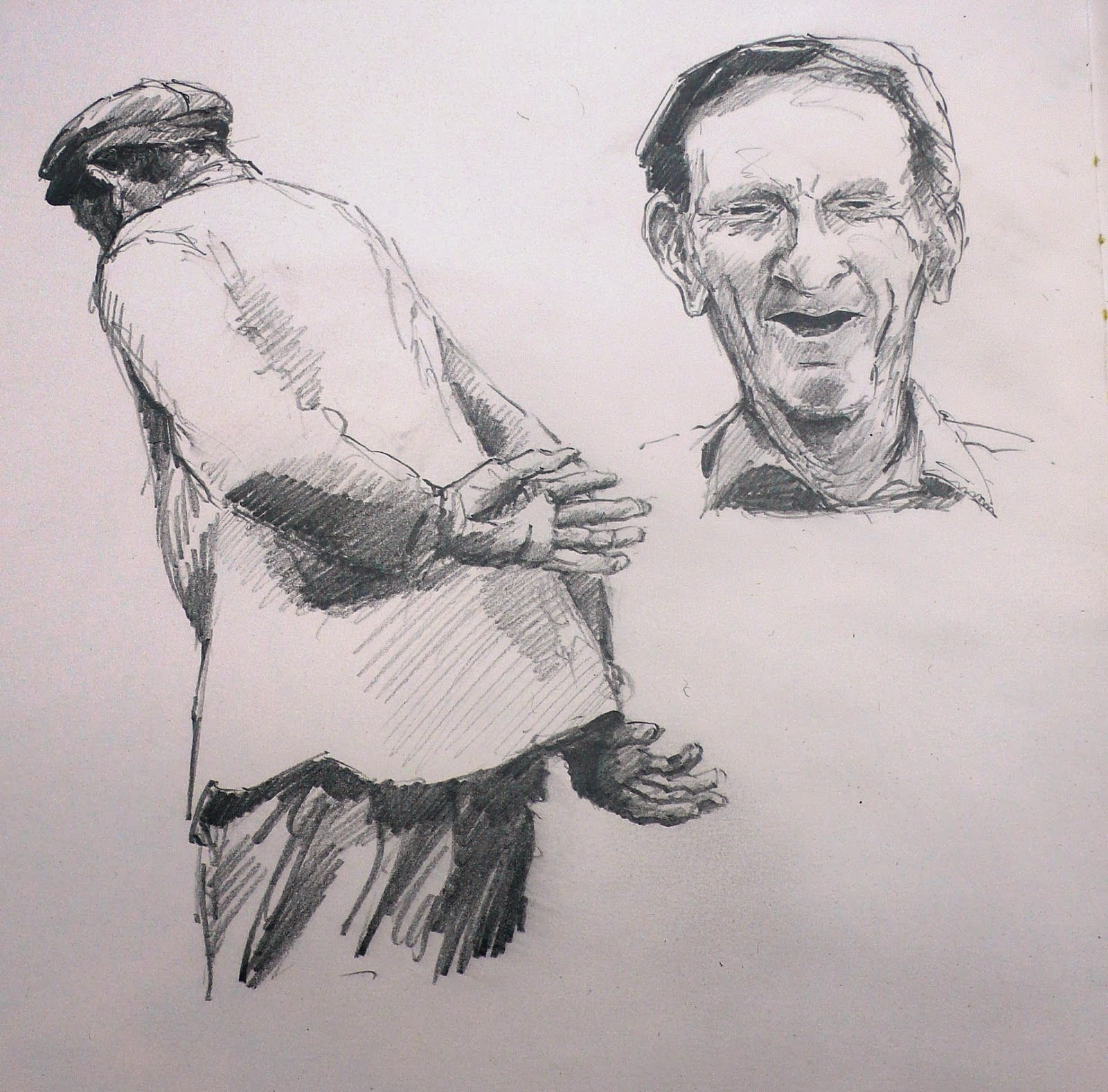 There amongst all the modern supermarket shelves I see him, a great lumbering fossil of a man, something prized out from between the pages of my youth, and I wait for the smell of oily sheep's wool to waft past. He examines a plastic bag of mixed chopped veg and I wonder does he know about stir fry, wasn't it just tatties and swede in his time? His Harris Tweed jacket is almost shiny at collar and cuffs as he slumps forward on the bar of his trolley for support. His glasses are half way down his nose, a nose that sprouts hair externally as well as internally, white stubble powders his leathery sunken cheeks speaking of ages past, of evenings sipping peaty whiskey in smoke filled rooms, and his gnarled oversized hands that attained such grandeur with professional skill of shearing sheep during long summer days. Now they grip the bar of the trolley like two great claws of a perching raptor long since extinct. This is a man of my youth from Tarbert market that lent heavily on the iron gates as he tipped his head to the auctioneer and twitched his mouth in a silent bid. The man that held at arms length an ash crook with rams horn handle to catch a young lamb by the neck. The man from endless summer afternoons who walked the stubble fields behind a clanking binder standing oat sheaves into stooks. The man who took my tiny smooth white hand in his and shook it with a grip both firm and tender leaving me confident that in his presence I would always be safe. I pulled myself back from another age and century with the strangeness and abruptness of an unexpected moon landing, as I stared at my own short shopping list; fruit, bread and cheese. 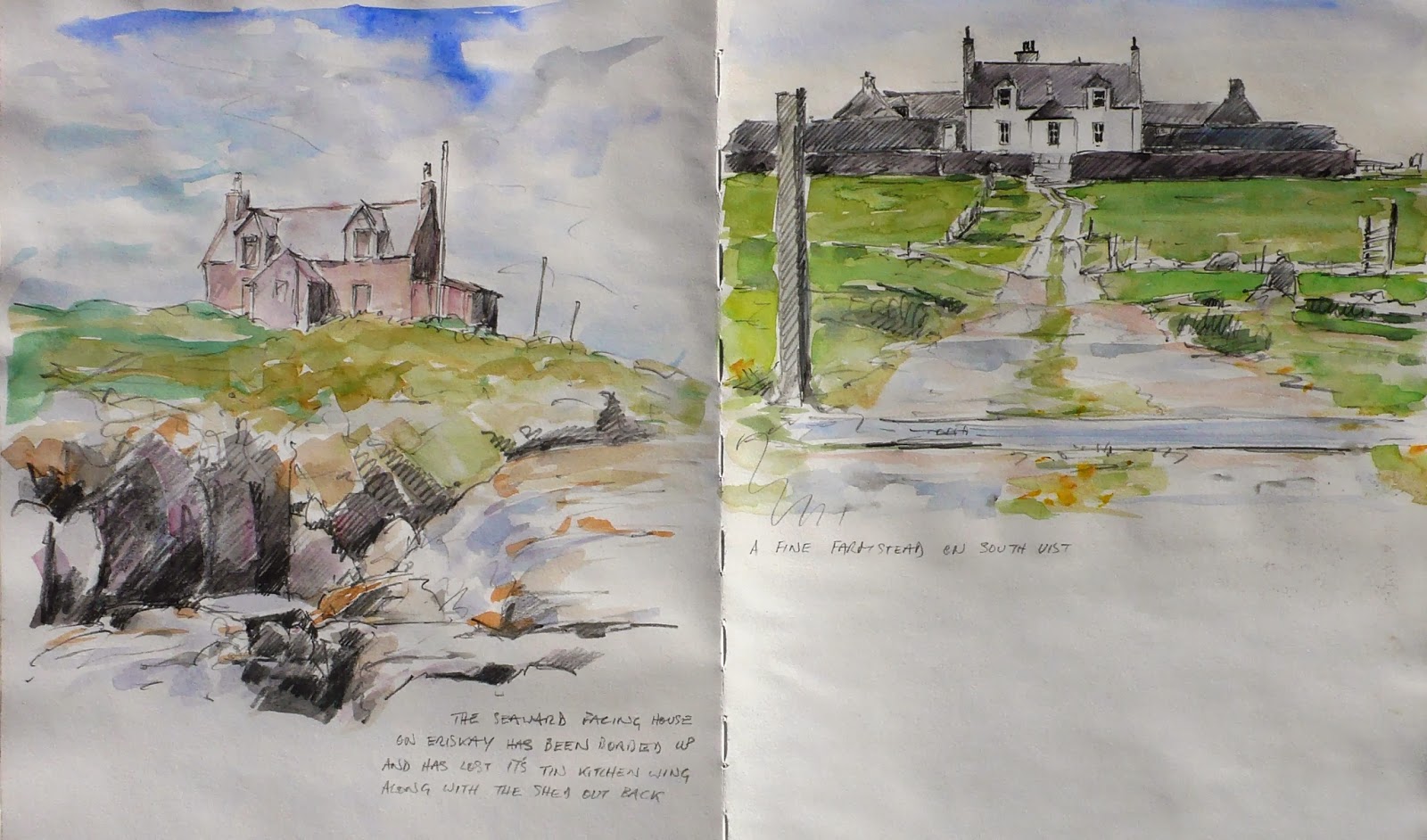 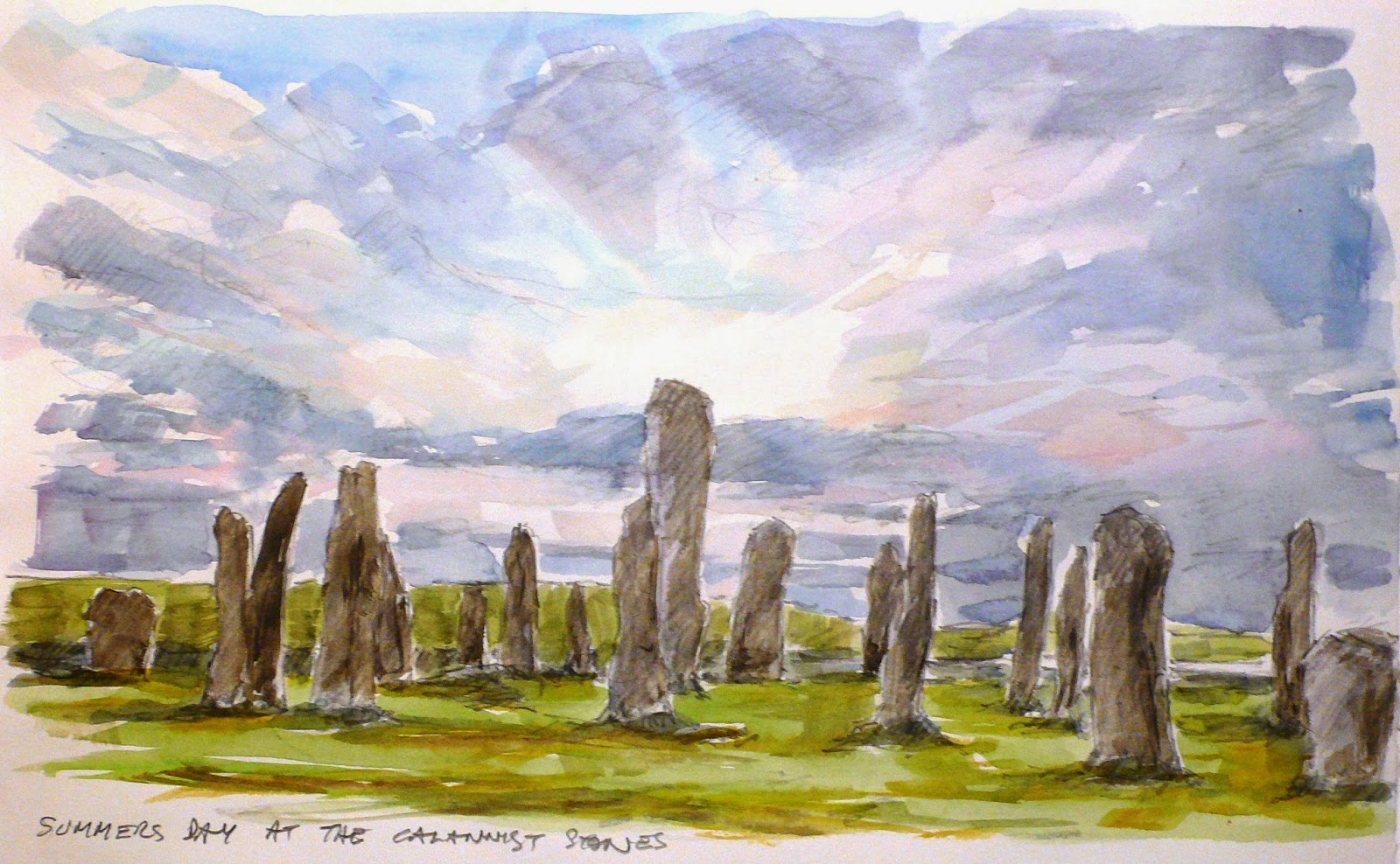 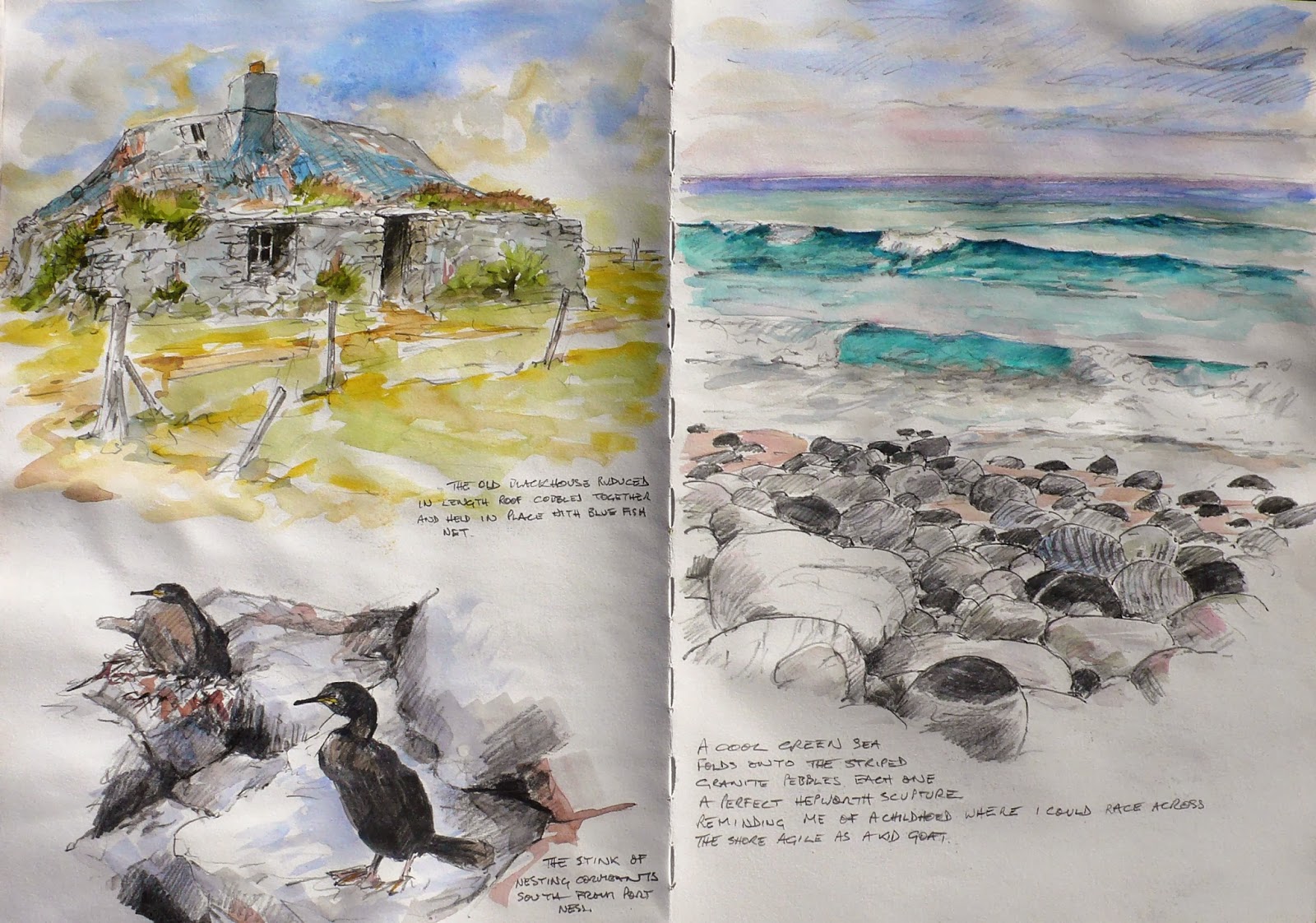