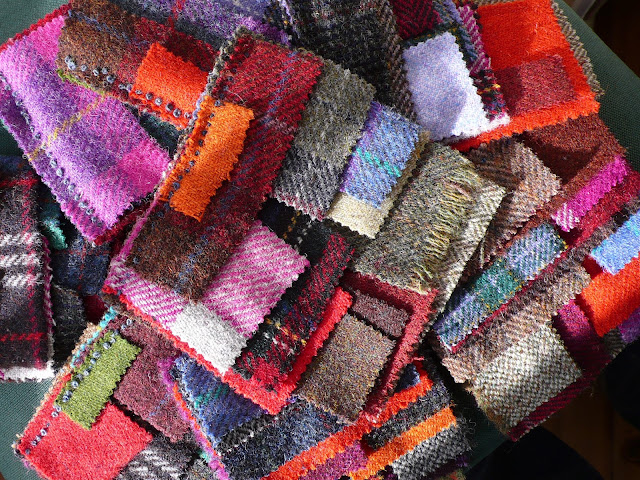 Thank you or thanks…….., such an English thing, and often used or overused much like sorry. If we give our thanks at every possible opportunity this might be taken as good manners or it might just be seen as dulling down the sense of being truly grateful. I would say thank you to someone who had saved my life but perhaps not to my brother for having cooked us a meal. In that case the thanks would be taken as read and need not be heard. My brother cooks a meal while I cut the beech hedge, all part of the working day each has his job and when all is working well within a close team there is no need for thanks.

So with that in mind I would now like to thank all those who have taken time out over the past two months to visit my exhibition at the Victoria Gallery in Bath. There have been many who have travelled a considerable distance to spend time to stand in awe of the intricate stitching and marvel at my dogged persistence over the past three years to have produced such extra ordinary pieces of work. In recognition of this two magazines have chosen to run articles which appear in this month’s issues of Selvedge and the Embroiderer’s Guild magazine.
The sale of work has been good considering that there is a 42% in commission for the gallery. We must accept that in any form of retailing there will be such mark ups.  During time spent in the gallery the staff have been charming and helpful at every possible opportunity. I have been faced with an almost constant round of questions and comments from visitors. “You must have tremendous patients” is amongst the most common but in truth I have very little, what I do have is a tremendous curiosity to discover just what I am capable of creating. The excitement is continually present as I stitch to see just what change a few minutes with thread and needle will produce. 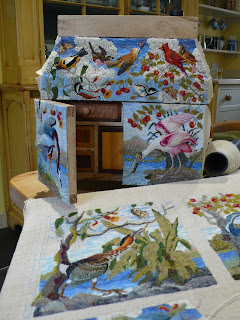 On show as work in progress has been a stump work casket which has been perhaps the star attraction. My line of research for this took me almost immediately to the Victoria and Albert Museum and the most exquisitely fine work done by Martha Edlin at the age of 11 years old in 1668. The casket which I had no intention of trying to reproduce is in perfect order and seems to have miraculously retained its original colours. I decided to stay clear of the human form but to concentrate on birds and butterflies in order to incorporate the widest range of colours from my stock of yarn. The box itself had been made over in Brittany by my friend Simon who in his retirement enjoys the challenge of something small scale rather than oak framed windows and doors. The bank of seven small interior draws I veneered in choice woods and turned up minute boxwood handles as well as lining the interiors with some old floral material discovered when recovering a Victorian easy chair. I had just enough old linen left to act as the support material and started by trawling through my Audubon’s bird book for ideas. On the lower half I kept to marshland and wading birds, and on the sloped section I turned to birds perched in the trees while the lid was reserved for birds in flight. Having drawn out my rough sketches I then turned to stitching on white cotton all the birds that would appear as raised work.
Starting with the two small doors then front slope and sides I spent the next three months over winter in Brittany and Cornwall stitching in the backgrounds. The result when fixed to the box was a riot of sumptuous colour, packed full of intense detail, a real feast for the eyes. However that was not the end of it as there remained the top and the entire back panel which owing to my attention being taken up with the exhibition in Bath looked like another three month project. The top came together reasonably quickly as the birds had already been stitched into place. I finished this off during the first week in Bath but then discovered it to be slightly too small length-ways so when fixing the embroidery I was obliged to cut each piece separately and even add a little more stitching at either end. 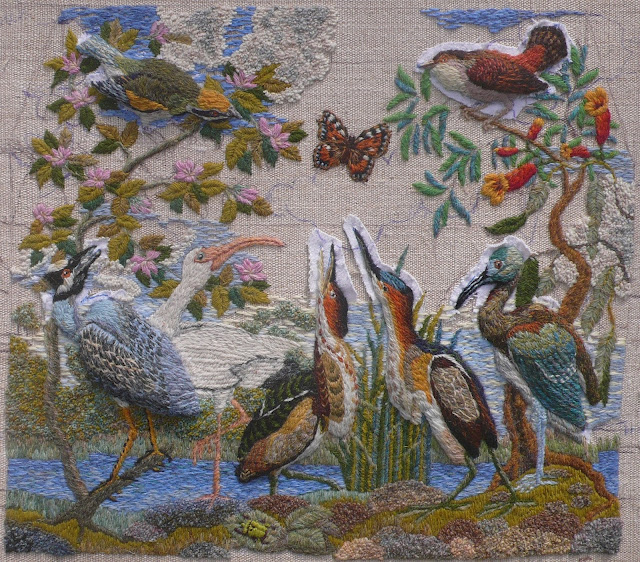 I've been working on this 17 th century style casket for close on six months and the final back panel is nearing completion. Thanks to the best part of a day spent at the V&A Museum I have now settled on how I will construct the braid to finish all the outer edges. I am not a great fan of touchy feely museum experiences but the chance to have a go at making a short length of braid as used in the 17th century enabled me to log and retain the technic just to the point where I could have a go using some tweed wool yarn. 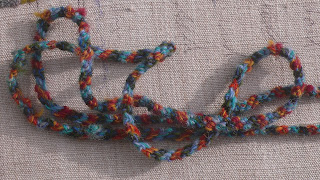 The alternating mix of colours should be a perfect way to frame the work.


There is a certain degree of selfishness involved in launching into such creative works in that I always consider the finished item will be for myself which more or less counts out any idea of taking on commissions. I had hoped to organise the continued exhibition of the six biblical works but this has proved to be too difficult for a man with my limited experience of modern day communication. So I will be taking them back to the Isle of Lewis where the idea of stitching using Harris Tweed yarn first bore fruit and either display them at home in New Tolsta or look for a suitable Hebridean exhibition venue. I am very conscious that I should have already been cutting peat by now and that it will be later on in May before I can attempt that if my back will stand it. There is so much to return to since this year I move my studio from the depths of Central Finistere to the splendid isolation of New Tolsta. To at last have a real studio with space to wield a brush and stand back from a larger canvas will be such a treat. I have plans to paint that have been brewing on the side for almost three years during my period of stitching. I can’t imagine throwing in the needle just yet but my creative output will I’m sure diversify once more.
Posted by Hebridean dreaming at 2:47 PM No comments: