Build it and they will come, maybe!

The building of Studio 17.
It was nearly ten years ago that I realised my need for a studio but my life at that period was in a state of flux and some would say it still is. However after many years of considering that wherever I happened to be was my studio I began to feel with age that not only merited but required the comfort of a purpose built space. Since my art work had become very diverse this space would require four significantly different work areas. The main studio space would still be my painting and for this I required both height for the easel and room to manoeuvre large canvases as well as be able to step back a good distance from them. This had always been the problem with my studio in Brittany in that I had to physically step out of it and look back in from the adjoining room to obtain the require separation. 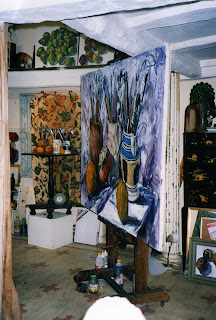 The second space was for my needlework and although I hadn’t been doing it that long I recognised that stitching would always be a significant part of my creativity. For this more sedentary work I would require a heat source as well as good light. The third section would be more multipurpose but would cover my feather and shell work as well as storage area, while the fourth and final area would be a woodworking space where framing, furniture making and upholstery was possible. This I decided could be housed in the existing barn and would not be require in the new build.
To simplify planning as well as construction I decided to go for a separate studio building which meant that as long as I stayed under four meters in overall height no planning was needed. Building regulations would still apply but I had no interest in constructing anything that wouldn’t withstand the harsh Hebridean winters. The project would not have taken place without the dedication from conception to completion of Steve Adams a friend and local builder living in the village. We worked well together but beyond this I recognised Steve was someone I could have completed confidence in. 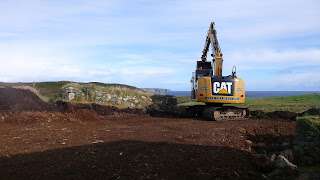 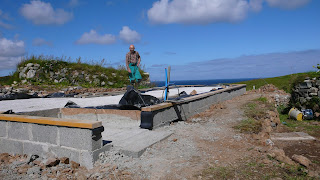 In the autumn of 2015 I had Alex Mackay in to dig out and prepare the site at the back of the old barn. My one fear was that we would hit rock but luck was on our side and the bulk of what we had to remove turned out to be rich black soil. The flattened area would now have a good nine months to settle before foundations were dug. In July 2016 with the insulated and reinforced concrete pad poured we were ready to come out of the ground with the timber construction. All the wall panels, roof trusses and A frames we made and assembled in the nearby large tin crofters shed which was a great help in speeding the process up as well as staying out of the weather. Each section was mounted on two small axels and wheeled around the back of the house and into place and my long awaited studio suddenly took shape. There always seemed to be extra pair of helping hands when we needed them and what often seemed daunting to me turned out to be remarkably simple in Steve’s capable hands. As the roof took shape my ability to clamber around in awkward spaced saw me doing all the plating of the roof truss joints with nearly 25kl of nails. The timber cladding firmed everything up and was quickly followed by the waterproof breathable membrane, battening and corrugated tin. By mid-October we were water proof with just one section of ridge left to seal everything off. During the long winter months while stitched away for my stump work exhibition in Bath, Steve carried on with the interior and by the time I returned in late May the studio was insulated, electrified, plaster boarded, plumbed and painted. All that remained for me to do was move in. 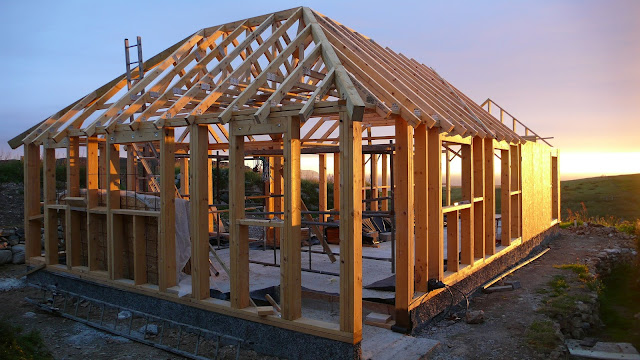 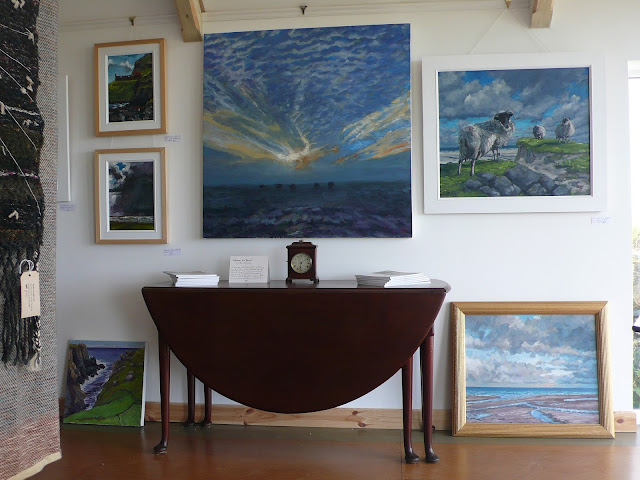 I had arrived at the end of May with my van packed exceedingly tight with a good quantity of my creativity kit plus extra house furnishings. Believe it or not I’m in a process of scaling down but thinning or throwing out has never been one of my strong points so perhaps it would be more accurate to say that I’m spreading things about in the hopes that thirty years of accumulation doesn’t look quite so daunting. When a George III red walnut circular pad foot drop leaf table turned up in a local down-cycling shop for £90 I couldn’t resist it reasoning that it would be ideal for display as well as working on. 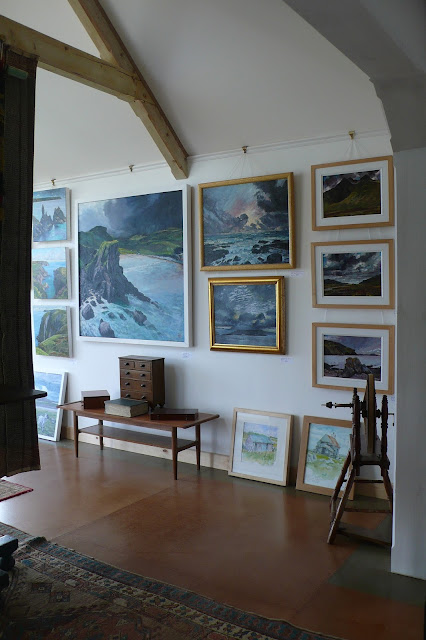 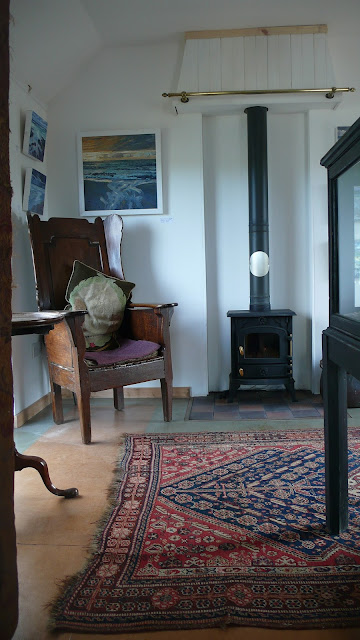 Today Steve was back to put in the wood (or in my case peat) burning stove and it turned out to be one of the worst midge day this year with light rain and no breeze. Keep calm and carry on seems to be Steve’s way of dealing with them while I burka up, pulling down my woolly hat and zipping my top up to nose leaving only eyes exposed to the midge savagery. Completed by late afternoon I light the first fire and now as the sun dips over the ridge I sit, T-shirt toasty warm in my studio while outside the window two goldfinches forage in the swaying seed heads of sorrel and bumble bees still busy attending the foxgloves. It looks like the heating will be very economical with three small peats enough to heat the entire studio. I have exactly the same stove to install in the parlour which will mean comfortable winter evenings with a whiskey and a good read. I noticed in the mirror another facial wrinkle today running out and down from the corner of my eyes, smile lines of contentment.
So with the naive notion that, if you build it they will come I set the official opening day for last Saturday; in hindsight possibly the worst day of the week to open being change-over day for tourists while shopping, sheep shearing and TV sport takes precedence for most locals. Let’s face it, there are very few people make it up this far and even fewer who have any interest in purchasing art. Several people have suggested I should be serving teas, coffee and cakes to which I reply “you know where the kettle is and the cake tin, I take it black no sugar”.  Studio 17 is a dream of a place for me to paint and create in but it is yet to be seen if it will also work as a place to display and sell free from gallery commission.