What to do with two large sacks of Harris Tweed salve edge. 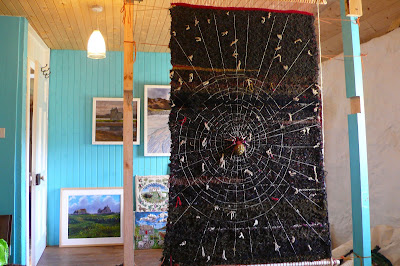 Stay long enough on the isle of Lewis and you’ll find yourself either cutting peat, working with sheep or weaving, I’ve already ticked the boxes on the first two so last week I was not at all surprised to find myself building a loom. An old black an white photo of an islander at his loom looked inspiring and like a true naïve I thought if I kept it simple warp and weft surely couldn’t be all that difficult. Well after a couple of false starts I borrowed a book from a friend and discovered all about headers sheds and shuttles. 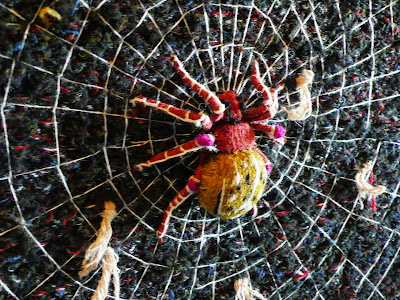 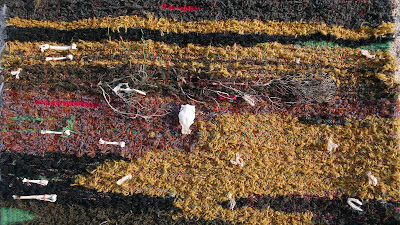 A few weeks ago a neighbour asked me if I wanted any off cut wool from his Harris Tweed weaving and so already having completed one needlework picture and always willing to accept any raw materials I said yes thank you thinking this would surely come in useful at some point. When two enormous bags stuffed full with salve-edge arrived on my doorstep I realised this was going to be a larger scale project. I’d seen a friend’s work with salve edging where she knitted it into hearth rugs and bath mats but having seen an illustration of a Navaho Indian loom I felt this might be an ideal and relatively simple way to start weaving. The natural dyed wools of Harris Tweed evoke every colour of the Western Isles and so I felt whatever I did with the wool would be bound to represent the surrounding landscape. There is something wonderful about launching into a new method of creation, and through play finding out just what is possible. Within half a day of starting the floor of the studio was covered almost knee deep with mounds of wool and the process started to make sense. It was also obvious that this process allowed for much in the way of versatility as I thought of all the different things I could incorporate within the weave and my mind raced on creating extravagant finished hangings within my head. Having started weaving one evening I dreamed of the repetitive process for most of the night so keen was I to press ahead. With visitors gone and the days proving far too damp and midgey to continue painting the roof I pressed ahead with childlike enthusiasm for the magic of seeing my first woven hanging appear before my eyes. My thoughts drifted back to Shill School in Burford and my very first close up encounter with a loom when on Wednesday afternoons we (all 18 of us boys) would march single file over the bridge that crossed the river Windrush to the Mouse house. We would rip up old sheets into thin strips, boil onion skins to make dyes and learn about keeping bees such were the joys of a small weekly boarding school in the early sixties. I raised my eyes hearing feet crunching on the gravel outside the studio window. I’d left the open sign up for days now in the forlorn hope that people might just happen by and was this at last someone come to look, if so the colourfully clothed couple were walking in the wrong direction. By the time I stuck my head out the door of the studio they had made the road walking heads down with a brisk purposeful pace outrider sticks tapping out a rhythmical stride. How strange I thought to have walked up across the dunes through the croft then climbed the boundary fence as well as that of my vegetable garden and not to have even glanced sideways at the pictures in the window. Evidently not everybody is interested in art but I felt I had just cause in feeling slightly miffed. The walkers had stretched the idea of the right to roam to the full so while traversing my garden they might have at least made some pretence at looking at my art. Later that afternoon they came back and I was full of smiles and ready to show them around but they only wanted to enquire what time the bus came past. Being polite can at times be such an effort. I’m often told I must have tremendous patients to create such complex works but I tell you now opening your doors to the public so they might see those creations requires infinitely more.
Posted by Hebridean dreaming at 3:02 AM