Daniel in the lion's den.

When I look at the stitching work I have achieved over two days it strikes me that a machine could have done it in a matter of seconds, given the right program with the corresponding image it could have stitched a perfect leopard far better than I could ever hope to achieve with my failing eyesight and fumbling fingers. So why do we bother doing anything by hand, what is it about the human hand, that human touch that values the handmade above the machine made?
Ever since man stood on two legs he’s been looking for a walking stick to make life easier; when he turned from tanning the hide to shearing the fleece it wasn’t long before he invented a machine to weave. Almost forty years ago I purchased at auction for the princely sum of seventy eight pounds five piece of framed embroidery, amongst them were two 19th century samplers, one early 18th century sampler, a religious embroidery on silk and a the framed front of a silk waistcoat encrusted with the finest of embroidery. On the backing paper of this frame was a text that stated this was the waistcoat of Sir Walter Raleigh. I sold it that same week for thirty eight pounds and since having studied work from this period am now convinced that someone got a bargain. Today it is hard for us to imagine how the human hand could have created certain pieces when spectacles were unknown and illumination was by candles or daylight. 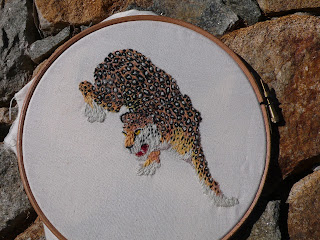 During the heyday of stump-work a glass bowl similar to a goldfish bowl was placed on an adjustable wooden stand between the candle and the work so as to focus the available light.

For nearly three days I sat and unpicking an old remnant of Harris Tweed to get just the right tone of peach thread and reusing it for the leopard’s pelt. I overworked this with black and white to create those spots and watched the menacing image come to life.

According to The Bible Darius the King of Persia cast Daniel into the lion’s den but I decided right from the start to liven that image up to include a variety of big cat species. 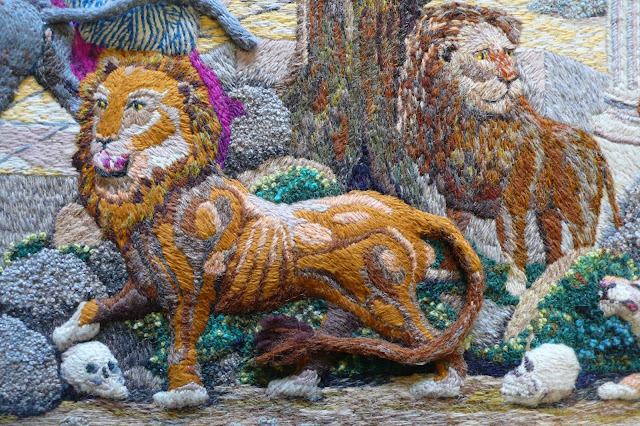 The first rough composition sketch put a classical almost sculpted male lion in the centre foreground with the somewhat worried looking Daniel off to the left surrounded by cats, while top right a guardian angel floats unseen by the King who has come to inspect the fate of Daniel in his overnight accommodation. Even though the drawing onto the canvas is kept to a guide line minimum there is still a real sense of magic.
I’m often told that I stitch like I paint and that maybe so when considering mixing of colours and the use of contrast but wool certainly does not behave like paint and I find the slow progress is more like slow motion drawing that gives me the time to more easily access my inbuilt library of information.
I started stitching Daniel in the lion’s den in Western Australia, continuing in France and finally completing it during the summer months in the Outer Hebrides where I could source a more complete range of darker shades from my stock of Harris Tweed bobbins. To get enough detail and expression in the human face stitched in about a square inch is often a matter of chance but I was pleased to have achieved a degree of terror on Daniel’s face. 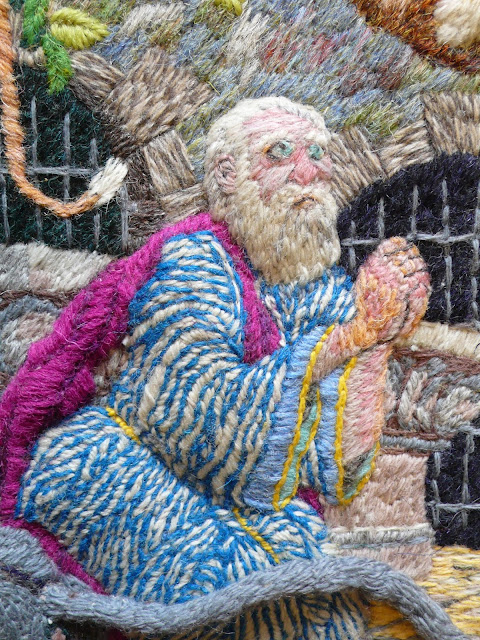 As the separate pieces are assembled and stuffed with cotton wool the lay out of the picture changed and in order that the cats were well spaced I introduced an old tree for them to climb on, while pillared architecture was introduced to support the ceiling of the subterranean den and give the image more depth. 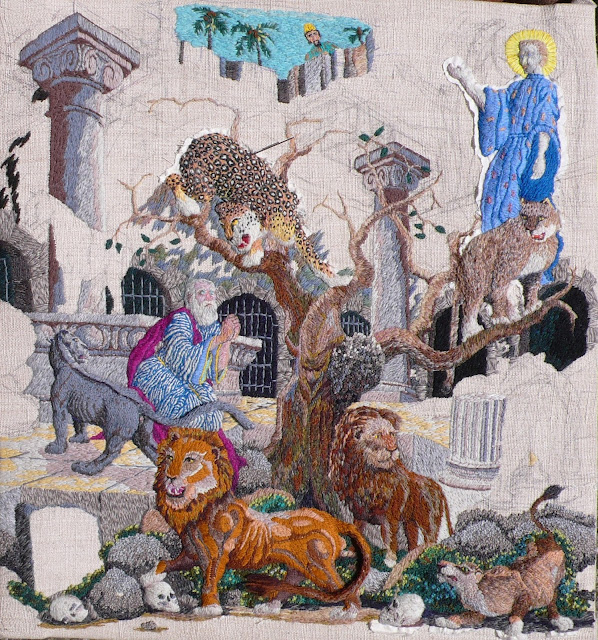 While waiting for my connecting flight at Doha airport the entire Qatar Airways on-board crew formed a half circle of admirers around me as I stitched. There is a fascination with textiles across all cultures and as soon as they had moved on two elderly Japanese women replaced them and even with very limited language I was able to explain how the raised work was done. It is very rewarding to be seen as someone special who is not playing on their I-pad but actually creating something with their own hands.
On a recent visit to a textile shop I spotted some sowing machines and their ability to stitch had been well illustrated by a small piece of perfect embroidery showing a beautiful young woman wearing a large hat full of flowers, alongside this was a second identical piece all done with a simple computer program and no human input. The age of the machines is with us but in the field of art it’s that hand-eye coordination via the brain that creates charm and guarantees that the handmade will always be superior to the machine simply because it is human. 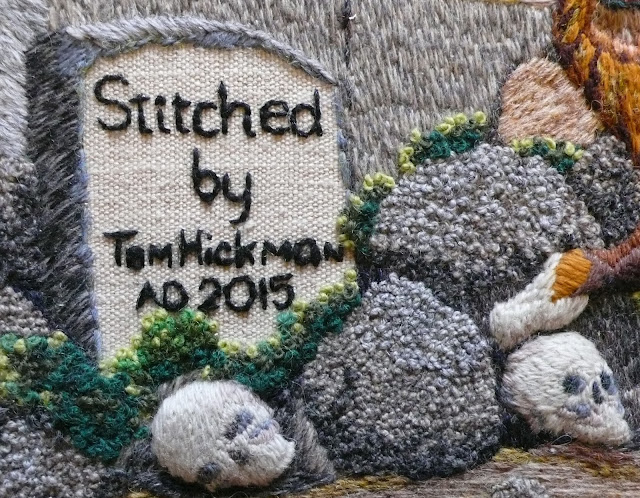 Posted by Hebridean dreaming at 4:47 AM