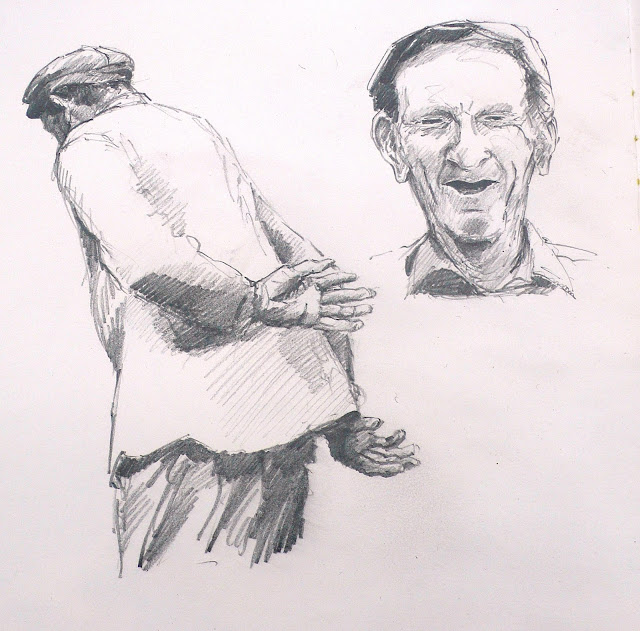 Ever since I arrived back in New Tolsta I find myself with an almost constant fixed grin, there is much that brings a smile to my face. There is only one small problem with all this grinning and that is the state of my teeth. There are fast becoming what I would term as character forming teeth.
I’m old enough to remember character teeth from the days when both chewing and pipe tobacco were readily available along with gob stoppers and sherbet dabs. As a child in the late 50’s I found myself fascinated by adult’s mouths and in general the older they were the greater the intrigue. Mouths full or not so full of discoloured, misshapen and rotting teeth. Sure there were dentures, very obvious false teeth but these were still seen as a luxury amongst the poor of rural Scotland. I well remember one elderly neighbour whose top set of teeth would constantly be dropping down but it didn’t seem to impede the art of conversation as she nimbly pushed them back into place with her lower lip. On the neighbouring farm Cathy Helm had all her teeth out as a wedding present from her father, she was only eighteen. Neil our 80 year old shepherd made do with a handful of discoloured stumps to chew his tobacco and was still able to hit the spittoon with remarkable accuracy. Then there were those who seemed to have more than their fair share of teeth their mouths crammed to overflowing while others had fangs that sprang out to meet you like a blown over picket fence. People seemed defined by what was in their mouth as much as the utterances that came out of it. My own front milk teeth left me a gap through which I could fit a sixpence and my grandmother was delighted to point out that I would never worry about money. This did not signify that I was destined to become rich, simple that I would not be troubled by money. On my first visit to the dentist when asked to open my mouth wide I screamed so loud that my mother came rushing in from the waiting room to discover just what sort of torture I was being subjected to. The dentist looked alarmed and meekly protested that he hadn’t even touched me yet. When asked why I had screamed I replied that I’d been told at school that a trip to the dentist was always painful so I thought it best to scream in preparation, before it really started to hurt.  When my two front milk teeth dropped out and new teeth came through I retained and even larger gap through which half a crown would easily pass. The dentist identified that I had a small jaw which required extraction of one tooth top and bottom on each side. I remember every suck, twist and crunch as the dentist took a firm grip of the pliers and pulled.  This procedure was repeated for my second teeth but that time I was given gas and felt nothing having been well drugged beforehand to the point were getting from the car to the dentist surgery was a giddy affair. In time my three wisdom teeth were removed and in my mid-twenties I lost a lower molar which gave a grand total of twelve teeth pulled and those that remained were well filled. In those days it was common when discovering a small cavity to drill a massive hole leaving only a thin outer casing of dentine, so it is not surprising that years later when eating my healthy muesli breakfast it suddenly seems to contain lumps of walnut shell. I no longer eat any cereal with dried bananas in it having lost the outer portion of two teeth.


The first time I saved the surprisingly large lump of tooth and tried sticking it back with super glue; it only lasted until the following morning so I headed into Stornoway to register and make an appointment with the dentist. Registering was fine but there was a waiting list, a two year waiting list! Well I figured the damaged tooth didn’t look too bad and there was no pain so I’d wait. Eighteen months on the letter arrived the week I’m due to head back to Brittany so I call in to the surgery and explain I won’t be able to make an appointment till next spring. That’s fine but just as well I called in otherwise I would not have been confirmed as being registered with them. On returning this year one of my first port of calls was the dentists only to be told that they have my name on their files but I will have to be re-entered on the waiting list……, another two years. This would perhaps explain why here in the Outer Hebrides even with a large new dental training centre having been built alongside the hospital that character teeth remain such a common sight and that I will soon be mistaken for a local.Character forming teeth.

Posted by Hebridean dreaming at 7:49 AM