THE STORY BEHIND THE DOOR.

I have with age become a creature of habit at least for the start of each day. There is something very reassuring and comforting in a routine whereby I can break my fast without having to put my brain in gear at this early hour. Like millions of others I fill the kettle and turn it on without a moment’s thought as to where the power is coming from to make it boil. Then I step outside to greet the day which in recent weeks has been glorious and walking across the gravel I pluck a sprig of fresh mint to throw in the pot of green tea. Back inside I open the corner cupboard door and remove a late 18th century blue and white transfer printed bowl and from the hook below a heavy Irish potato print mug. Tea and muesli gets me through to mid-morning but today my mind went back to that blue painted corner cupboard door and the story behind it. 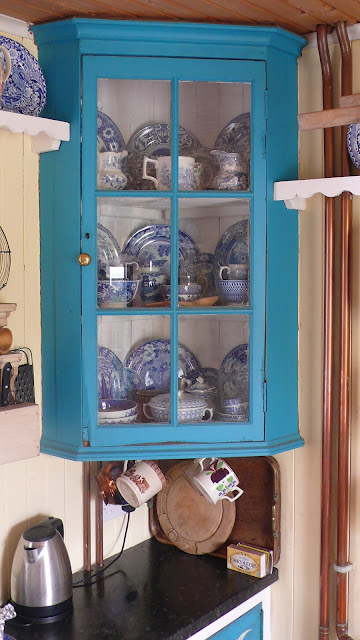 This door like most of the objects in my house has history. It came into my possession some thirty odd years ago when I purchased a small 18th century full standing pine corner cupboard painted in drab brown. From the start it seemed to me that the door was not original and on carefully scraping away several layers of paint from the body of the cupboard the original blue colour was revealed. However the door showed no trace of blue and proved to be a later addition. The cupboard was sold on with a handsome profit while the door was consigned to my wood store along with other scraps that I was sure would one day come in handy.
When in 1912 I moved to Brittany there was some serious sorting out but somehow the door still with its original glass survived the skip and moved with me. For several years it remained stacked away with lumps of heavy Breton chestnut and oak until the day I decided to construct a cold frame to bring on seedlings; the door would, face down make an ideal lid. Over the next few years it withstood the elements reasonably well but the paint became flaked under a baking sun and the damp had penetrated the animal glued joints and puttied glazing. I decided its days where over and so dismantled it and retrieved the glass. Once again it was placed back in the wood store but this time tied up with string in a flat pack condition and there it remained for ten years.
It has always surprised me that in our square cornered homes there are so few corners that will take a corner cupboard and the kitchen here in New Tolsta is no exception with three of the corners being taken up by doors and the forth has the hot and cold water pipes running down on the surface of the V lining boards. However there was enough room to build a cupboard and perhaps the old flat packed door would prove useful. I retrieved it from the wood store and even managed to find the six original panes of glass. That summer in Scotland I reassembled it and built it into the kitchen giving it that coat of blue paint it had always lacked. The most extra ordinary thing, after a chequered history of almost 200 years is that it still retained its original lock and key. Eat your heart out IKEA.
Posted by Hebridean dreaming at 2:40 AM