I WAS TOLD IT COULDN'T BE DONE.

Warning this block contains technical terminology which may render it partially unreadable for those not familiar with loom weaving. 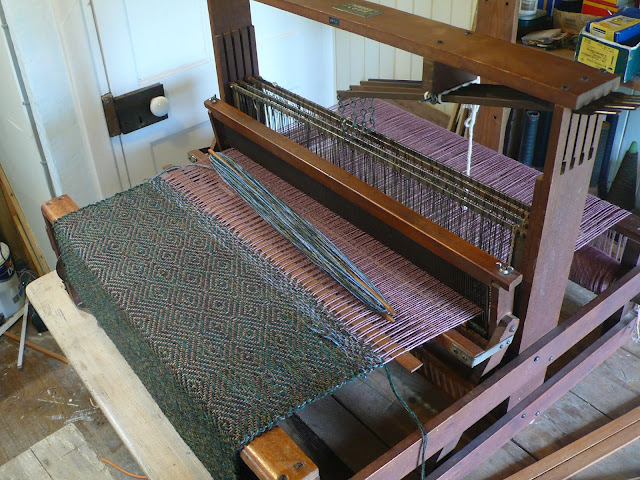 Not on a normal four shaft loom I was told since the caorig blankets have a repeat lozenge pattern spreading over twelve warps. This may sound rather technical and as a total beginner I was prepared to believe those more experienced weavers. But having played around with all sorts of combinations of weaves and different heddle threading I felt sure there must be a way. So I started to draw out a simple lozenge weave and after an hour thought I had the code cracked. They would be proud of me in Bletchley Park. On paper it worked but in reality would it be possible on my little table loom? The only way I was going to find out was to have a go. I decided to keep the warp all the same colour so as not to complicate things even further which speeded up the time taken on the warping board. Threading the heddles was somewhat complex but there was a repeated sequence which soon started to make sense. I finished at half ten that evening having beamed the warp and tied onto the cloth beam rod. I was heading into Stornoway the following morning but could not resist just trying a few runs of weft. For a blanket this can be five or six strands of different coloured wool at a time so as to give a good thickness. I soon found that my rise and fall sequence of shaft lifting from 1 to 4 and over 12 warps was going to be a slow affair since the sheds opened up were not sufficiently deep simply to pass the shuttle through. Instead I needed each time to insert a batten and twist it to make enough room for the shuttle. I am well acquainted with time consuming work so this didn’t put me off and within a few rows I could see it was going to work, it could be done.
Posted by Hebridean dreaming at 2:56 AM