Looking from a safe distance.

Such is the clarity of a beautiful sun filled day out on the Hebrides that I feel the veiled cataracts of any normal day have been lifted to reveal a sharper in focus world. Today with the arrival and constant calling of the cuckoo since dawn a walk and the peace of the moor seemed in order. I threw fruit and a cheese sandwich in the back pack along with binoculars, camera and sketch pad. There is so much choice in walking that I try not to give too much thought as to what direction I will take. Today I wanted both moor and beach so I turned right at the gate setting off past the quarry and up the track. Taking what was an old peat exploitation path I gained the high ground able to look north across the vast expanse of moor still clothed in the dead bleached grass of winter. 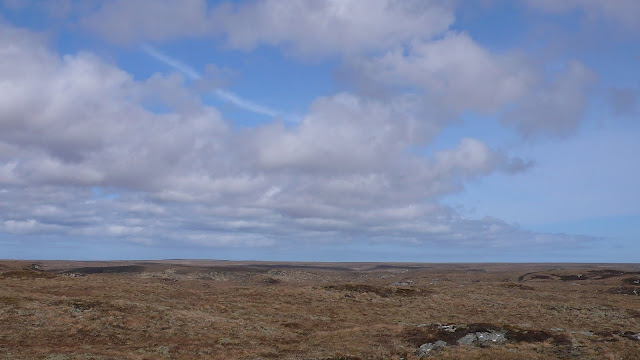 To the east the mainland was shrouded in hazy cloud while to the west the familiar mound of Muirneag seemed deceptively close to the human eye but not the camera. The trudge north gave a good indication of just how dry the moor was, unusually so for this time of year. Lichen white and moss black with the only sign of fresh growth the flash of King cup yellow in the trickling burn. The pessimists amongst us now worrying that this might be it for our summer and that bad weather will surely follow. 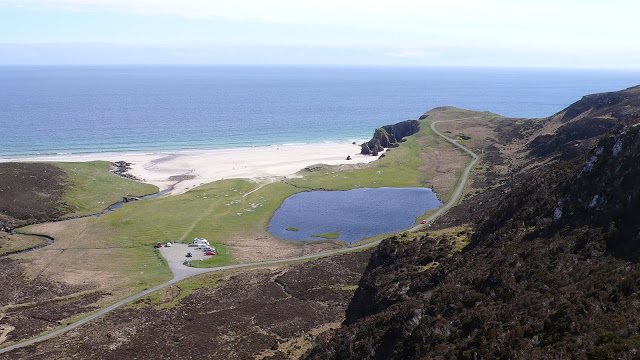 From high up above Traigh Ghearadha beach I stopped to eat and watch the comings and goings of the tiny people below. It feels so easy to cut yourself off form humanity and observe as if an alien. Homo sapiens appear to be a decidedly odd species with little or no rational reasoning to their behaviour. The extra ordinary reliance on the four wheel vehicles is remarkable and while some use this as a convenient means of transport others never actually leave the vehicle, driving until the road runs out beyond the “Bridge to nowhere” at which point they do a three point turn and head back the way they came. Some will stand several meter apart on the sand and repeatedly throw a ball to each other, which they apparently find enjoyable, while others will throw a blanket on the ground and lie out flat as if pretending to be dead. Many are accompanied by a dog and when this animal defecates the human picks it up in a small plastic bag. One might be forgiven for thinking that the human thinks this dog excrement has some intrinsic value perhaps for drying as with peat for fuel but no, the bag is either removed to a larger plastic container or simply abandoned in its wrapped and preserved state. The dogs themselves seem to take no interest in this strange human ritual of pooh preservation. 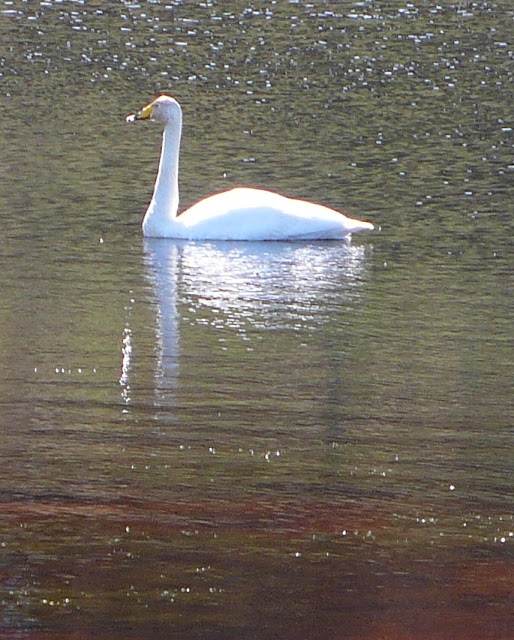 I descend down past my peat bank where things are crisping up at a record rate and then on down across the beach to the loch where for a second year a single Bewick Swan has decided to stay awhile. Mating for life it seems likely that this sad sole has lost its partner. On the machair there is no subtlety of natural colour in the family who have chosen to spread themselves out for a Sunday afternoon snooze.

I wonder if they know or even care that the mound behind which they shelter was once an Iron Age habitation and what would those distant ancestors think of these strange aliens. Why do people drive all the way to the end of the road and finding themselves in such beautiful surroundings simply choose to close their eyes? It is a depressing walk back along the road as I pick up litter and note that out of the ten cars that pass three managed their visit in under five minutes. I imagine in the future legs will become little more than another shriveled vestige of an unused appendage along with the human brain.

Posted by Hebridean dreaming at 8:39 AM