When I look at my first attempt at weaving on the little Harris table loom I am reminded of the piano playing of Lez Dawson; full of faults but still somehow fascinating. While Lez’s piano playing had genuine skill, able to hold one in gleeful suspense of the next wrong note, my weaving is simply full of errors and due to the repetitive nature of weaving these faults persist on a regular basis. The interest comes in the way these faults register within the various combinations of yarn colours. 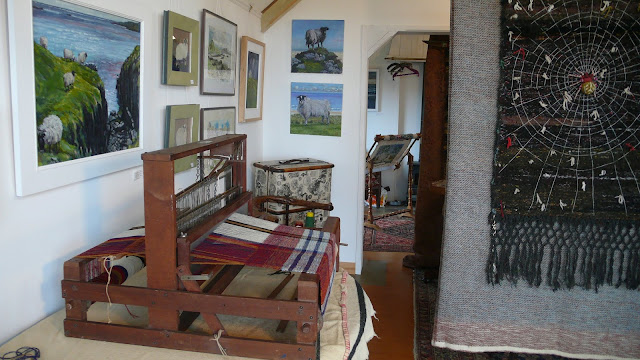 My next project will be to produce these errors in as random a fashion as possible. As I progressed in weaving this length of tweed wool cloth I wondered what it might eventually be used for and a scarf seemed the only logical conclusion. So at what I thought might turn out to be the halfway point I treated the warp as two independent weavings effectively splitting the warp in two so as to produce within the scarf a head hole that would prevent it being blown away in the blustery Hebridean winds. The choice of warp colours was to a greater extent made by way of the colours that I had the most of and the choice of simple basket weave meant that with the changes in weft colours a tartan effect would result. Far from the dark neutral colours of the Black Watch mine is more a colourful tartan travesty and at times more reminiscent of the old caorig wool blankets than any form of tartan. In the 19th century Queen Victoria’s admiration set Braemar reblooming in a veritable rainbow of colours. However during the first quarter of the 20th century there was possibly more philabegs worn in London than in Glasgow but out on the islands it was really only the older women who still wore a tartan shawl or headscarf, while today the new light weight colourful tweed has become the height of fashion.

Posted by Hebridean dreaming at 2:42 AM