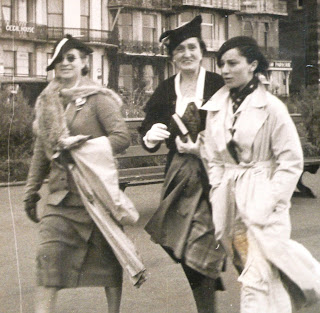 My aunt Flo central, promenading in Brighton with my mother and grandmother 1935


I recently discovered amongst an assortment of old sowing things of my aunt Flo’s a rolled up bundle of cloth which turned out to be an unfinished needlework of mallard ducks along with some of the embroidery cotton thread. They bore the familiar trademarks of Anchor and J Harris & Son, proudly proclaiming to be made in Britain. Probably dating from around the Second World War when great was still an acceptable adjective that helped to demonstrate that Britain although small was not insignificant. While I had no desire to complete the mallards I liked the idea of using the thread, so when I found a photograph of a pair of naïve antique needlework pictures that I had sold a few years back the idea of stitching something similar looked likely. Finding a suitable background cloth was not a problem as I remembered the old red velvet curtains from my childhood that now hang on my half tester bed and the fabric that I had saved when relining them. It took a little longer to discover just where I’d put that lining fabric, but my little exercise would be a process of total recycling as I remembered a small rather over the top gilt frame that would complete the blue bird picture. 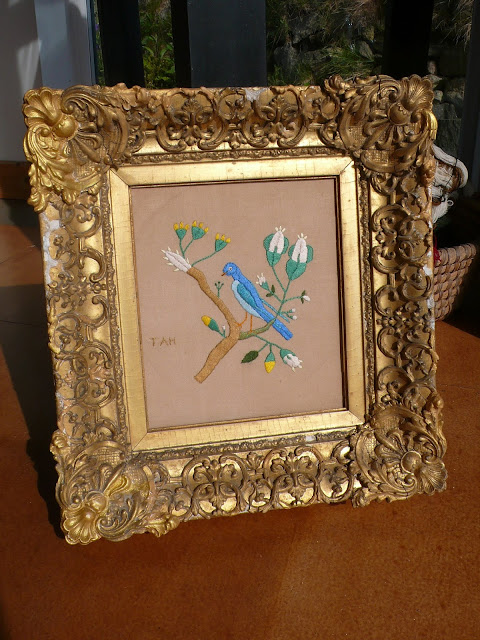 As I cut the glass my eye was drawn to the label on the back indicating that this was a frame with history “Gaston de Foix, the original by Giorgione in Lord Carlisle’s collection”. It is strange how the mind works but as I sat stitching those cottons I could feel the presence of Flo standing behind me her broad smile and sparkling eyes as clear today as they were sixty years ago.

Posted by Hebridean dreaming at 12:29 AM