LOOKING IS A CHOICE. 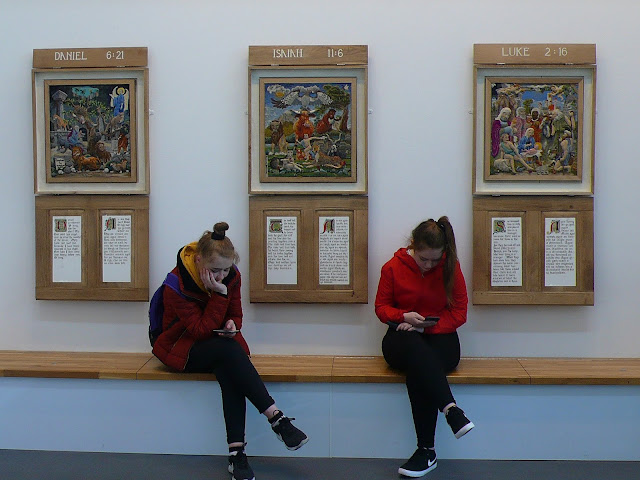 Looking is a choice but seeing requires the brain to engage.
It is generally assumed that we see with our eyes however these are simply receptors of light and it is the brain that is interpreting what is projected onto the retina. Unless the brain engages when the eyes are open and looking at an object then we will register very little detail. A casual glace, a quick peep or taking a butchers can be the starting point to seeing but in itself results in no lasting image that can be recalled at a later date. So when asked what was your favourite thing in the exhibition, and nothing springs to mind then you can be sure that while you ticked the box that said you had been there with your eyes open your brain was elsewhere. I can imagine in a few rare cases this could have occurred with my own “All that I do” exhibition. There is however so much to see that it is hard to imagine anyone not finding something that triggered their brain into making a closer inspection.
Although the space is very generous I soon discovered that even before the hanging began the nude and portrait paintings would not find a place, and that the other diverse images would need to be hung two or in some cases three high, more on the style of the mass hung Royal Academy Show. Hanging some pictures at a lower level meant that on Saturdays, when there are a lot of children in the art centre, there was also a level of excited delight as they eagerly pointed out pictures of animals before peering through the windows of the dolls houses. In some respects the younger children are the easiest to engage as they pounce on every new image with a freshness of spirit that us older seen it all folk find hard to rekindle. However during my Saturday attendance there were many who on realising that all that they were seeing came from the hands of just one man simply had to tell me how wonderful they thought it all was. I stopped counting the number of times people said it was one of the best exhibitions they had seen in An Lanntair and even as I popped out to get some lunch people who recognised me came up to congratulate me on the show. So I would say that was success enough. Red dots can also be a regarded as a measure of success and I am pleased to say there are a few even in these uncertain times. With most items in the £200-400 price bracket and ranging from under £40 up to £2800 there could be said to something for everyone. I was however still asked if I had postcards for sale, which rather shocked me as everyone seemed to be snapping away with their wonderfully silent smart phones. I suggested to one man that if he bought the picture he liked that he could make the postcards and in selling them by the thousand recouping his outlay and have the original plus a profit. I don’t do prints key rings or fridge magnets and will never be a commercial successful commodity arts like Jolomo.
Just before leaving for home I spotted two young girls sitting beneath the six biblical stump work tapestries and it made me realise that there at their fingertips lay the irresistible seductive gateway to a world I will never be able to compete with. No going viral for me unless they happened to have photographed those needlework’s and uploaded them onto Snap Chat. Weird to think that images of my work are being shared on little hand held screens around the world, and even these words might be read by people I’ve never met or likely to meet.

Posted by Hebridean dreaming at 2:57 AM