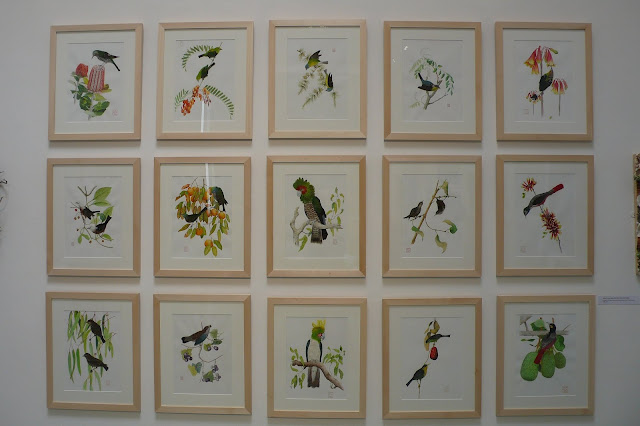 An interesting day at An Lanntair with plenty of people through. All sorts from the genuinely astounded through the intrigued and close looking to the handbag over the shoulder out shopping and casting an eye around but seeing nothing. From this last category thankfully I found only one; a well-dressed but rather arrogant looking woman with a timid mousy female friend in toe. They managed the full tour of the gallery and the arrogant taller of the two stood out immediately by the way she sauntered past the bulk of the exhibits without a second glance. They drew my attention initially as they came in laughing about some private joke or was that a reaction to seeing me sat in the old green painted tree trunk chair in the process of stitching. The feather bird pictures they simply did not see which to be fare has been the case for quite a few. Within most exhibitions there is usually a dead space which can often depend on which way you approach it and as the birds are place to the right of the first entrance people tend to turn left and are certainly drawn by the large centrally hung New Tolsta tweed map. So the birds are often side-lined or only appreciated when approached from the opposite direction. Even then many people don’t question why they look three dimensional and fail to look closely enough to detect that they are in fact made from real feathers, consequently we have yet to make a sale from that wall. 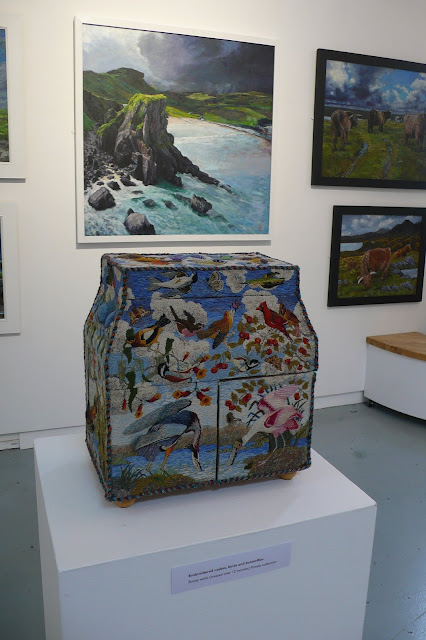 I told myself to calm down as the arrogant woman walk past the stumpwork embroidered box that had taken an entire year to create without a sideways glance. It simply didn’t register although the large shell overmantel mirror did merit a look, or was that her simply admiring her own reflection. I turned away to concentrate on my embroidery and told myself not to be so stupid to allow anyone so shallow to irritate me. This is only a tiny part of the price one pays for sitting in on your own exhibition. Thankfully the major part has been a total delight with an interested audience hold interesting conversations. 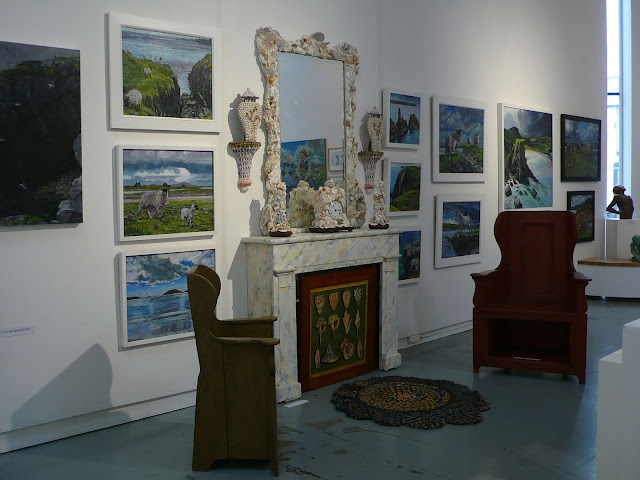 Towards the end of the afternoon I got into conversation with a group of young students and I was reminded how stimulating young adults can be when further education has triggered the enquiring mind and they’ve momentarily forgotten about their smart phones. They were full of insightful questions about art which pushed my thinking into new areas and approaches that made for excellent banter and a jovial exchange of reasoning. It made me realise how uplifting young people can be and how in my rather solitary existence I miss that interaction. Is this a sign of growing old?
The evening was rounded off perfectly when a friend bought me one of the last tickets to a full house performance of Stornoway Way. Three young women on stage the entire time depicted a stirringly witty and often profoundly sad display of what dangers there are for the young people raised on these islands. From their apparently idyllic upbringing they are thrust into a world that they are ill prepared for, where education has left them unqualified, religion represents the shackles and rigidity of parental failures, job prospects are limited and alcohol and drugs provides solace if not answers. A grim picture which can touch all of us even if it’s simply the fact that we somehow managed to escape that trap into adulthood. The laughter from the audience and myself was at times tinged with a sense of recognition, “that could so easily have been me”.

Posted by Hebridean dreaming at 2:32 AM