THE ETIQUETTE OF SMARTPHONE PHOTOGRAPHY. 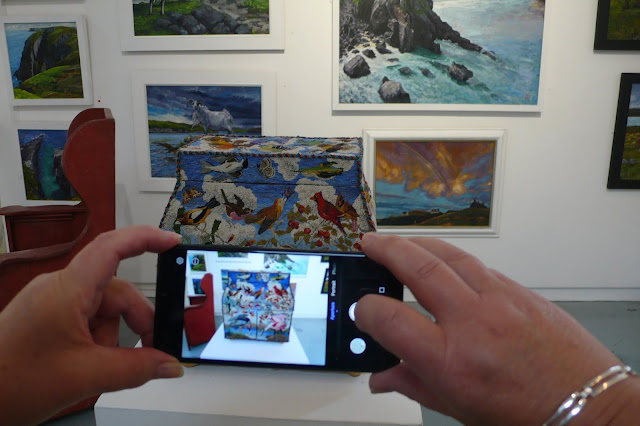 In the not so distant past it would have been unheard of to take photographs of an artist’s work during an exhibition and one could have been sure of a negative response from the gallery owner however polite the request. If you couldn’t afford the original or a print then there would surely be a small reproduction in the catalogue or book. We have long since passed the period of being politely requested not to take photographs by museums and galleries as everyone carries their mobile phone at the ready. That old concept of politeness still abounds within the walls of my studio where visitors would not dream of taking photographs without first asking permission. All that changes when those same images are freely displayed in public because now they are public and free. So do I now assume that all art should be freely available and if so how am I the artist to make a living? This past week I ran two paid workshops and have another this coming week plus two talks, however that alone won’t cover expenses. And between exhibitions where am I supposed to store it all. The words of a friends daughter spring to mind when after my first ever exhibition she said “Stop now Tom before it’s too late”. Is the overcrowded studio crammed with past work what all artists have to contend with in later life? Our own physical abilities become restricted in harmony with the shrinking studio space as insulating layers of stacked canvases encroach and the only way out is to start repainting. Those lustful nudes of yester years will soon become the passion of pastures new.
While sitting in on my exhibition in An Lanntair art centre I have been asked only a couple of times if it is OK to take photographs but that it usually to take a photo of me the artist, a man, stitching. So do they now want my sole as well? What is on the walls is widely assumed to be free for the taking. The taking of a photo is a process of possessing that image with no recompense to the artist. Once the excellent free image has been made using that smartphone there is no need to possess the original. If that image is then posted or shared on line then who is the owner. It would seem that just like music the visual arts are to be freely consumed. I imagine those happy snappers would consider that I should be flattered that they wish to point their phone in the general direction of my labours but unsurprisingly to me at least their image collecting leaves me cold. It could be said that I like those happy snappers am simply making images, but that is to oversimplify the process, painting a picture not only takes longer than pressing the button but also takes considerably more skill.
There is no way that the average person could afford to pay me for a year’s labour in stitching a stumpwork casket so in this hyper-connected world why shouldn’t they take a photo? Do they think to possibly share these images with friends? Maybe, but does that make it any more likely that I will have a sale? No, I have never sold any of my artwork over the internet or by photograph and what on earth is the purpose of a like? To me likes are just another loneliness indicator, used in the hopes that others may join in and confirm that you are not the only sad bastard on this planet who enjoys wandering around galleries with a smart phone.

Posted by Hebridean dreaming at 8:30 AM